Sudoku is a logic-based puzzle in which you attempt to discover where specific digits lie inside of a 9x9 grid.

The rules of Sudoku are fairly simple: you cannot have more than one digit (i.e. two number 5s) in the same row, column, or square. 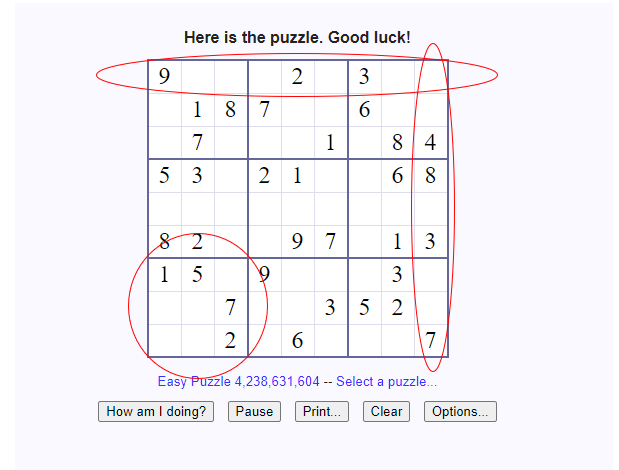 Sudoku squares are separated by the dark lines you see in a grid. You can think of a Sudoku grid as a collection of 9 3x3 squares for visualization purposes. 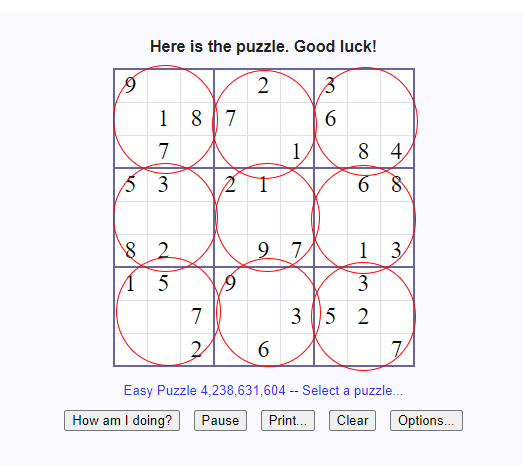 Let’s solve an easy Sudoku puzzle together! Here is a puzzle courtesy of sudoku.com, opens a new window: 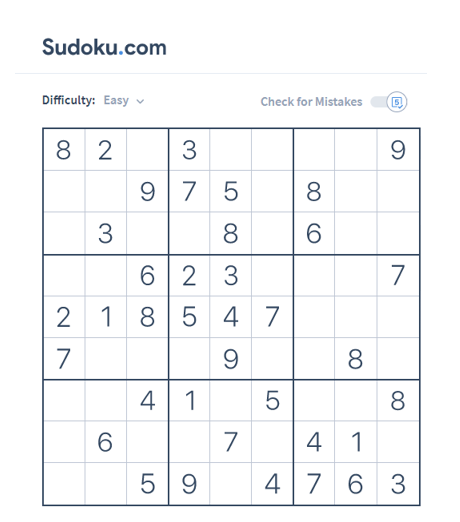 I like to start off my Sudoku puzzles by finding the number that stands out the most to me on the grid. For this particular puzzle, I see the number 8 the most times. So, to begin, I’m going to find a 3x3 square without the number 8 and see if I can determine where one would belong. Let’s use the bottom left square as our starting point. 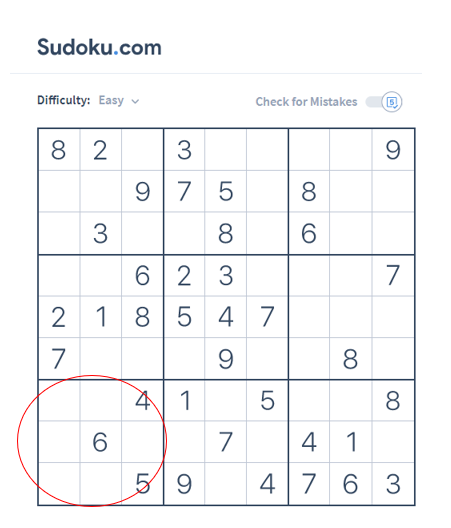 We know that the number 8 cannot go into a row or column that already has another number 8 already placed. 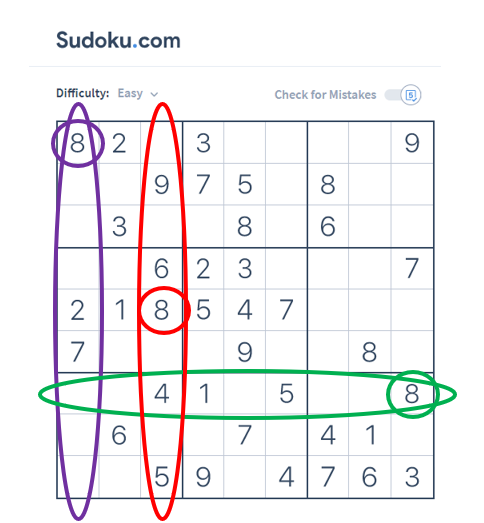 Using that logic, we can eliminate all squares on the board except for one! That must be where our next 8 belongs. Try using this technique to fill in the rest of the 8s. Afterwards, you should be able to place all of them. Your grid will look like this: 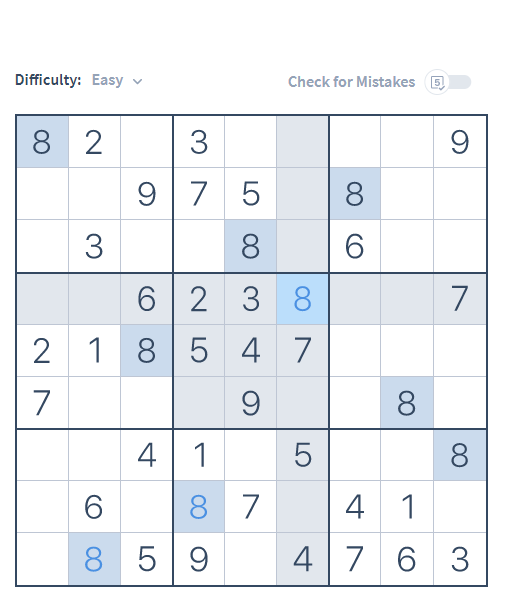 We can do the use the same technique with the 3s! Try starting in the upper right corner. I chose this corner because we can see that there are going to be restrictions with the 3s in the top and bottom rows of this square, along with the rightmost column. This tells us that we may be able to eliminate quite a few squares in this area for the number 3. 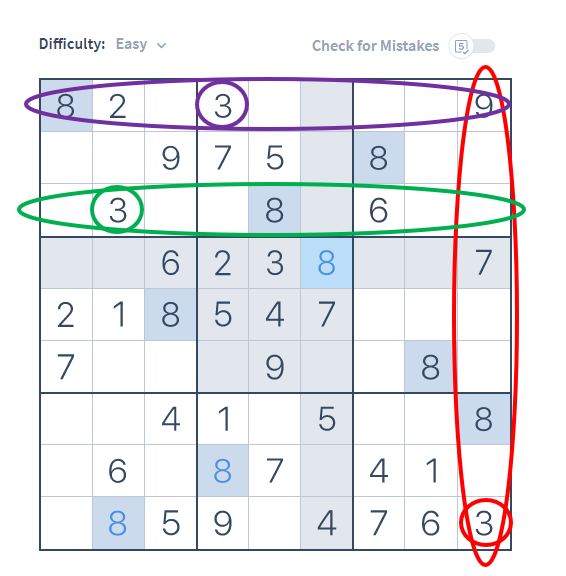 Try filling in the rest of your 3s! Afterwards, your grid should look like this: 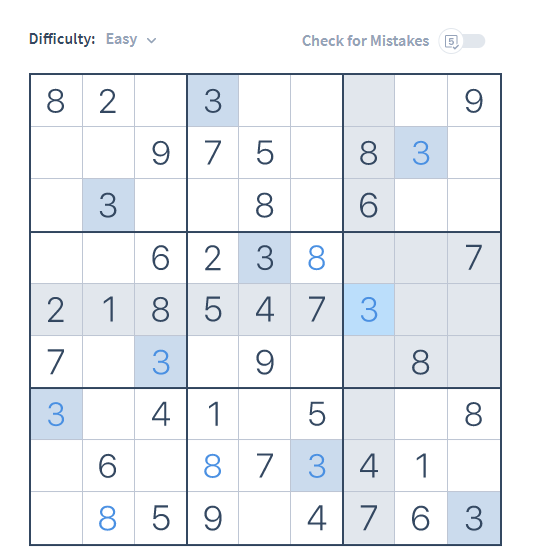 Try applying the same logic as with 8s and 3s with the 7s. I have chosen 7s as they are the next number that I see most often on my board. Take a look at the top left, bottom left, and top right boxes where 7s are missing. Think about which box looks like it will be the most restricted. In this case, it would be the bottom left box. We know this because we can see 7s in multiple rows and columns. 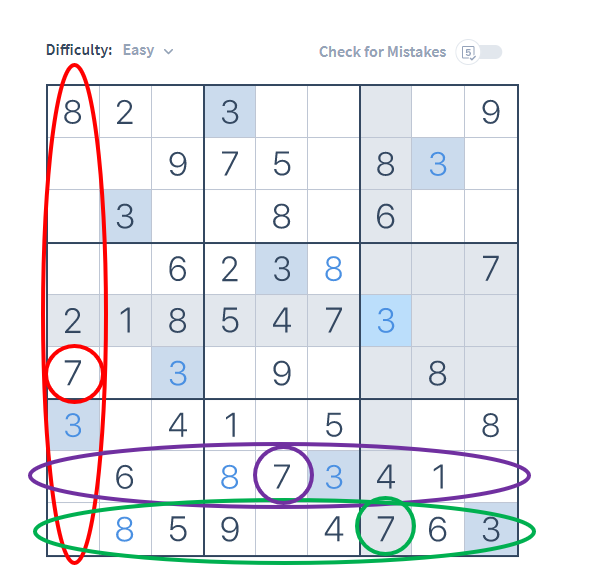 After filling in that one 7, let’s take a look at a different kind of logical thinking with Sudoku puzzles. If you tried to fill in all of your 7s, you may have noticed that we cannot logically place 7s in the top left or top right boxes because there aren’t enough restrictions. If you get to a point where you cannot place numbers in groups (such as doing all of the 8s and 3s like we did earlier), a good trick is to look at rows and columns that are almost full. We know that rows and columns can only have one of each number, 1-9. So rows and columns that are almost full are going to have a small number of options for what could finish them off. For example, let’s look at our middle row since it is almost full: 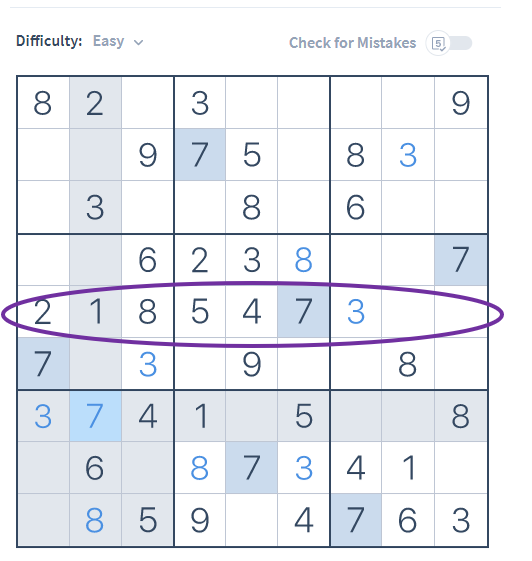 We can see that the only numbers missing are 6 and 9. Knowing that those two numbers are going to be in those two squares, in some order, we can take a look around and see if we can narrow it down! 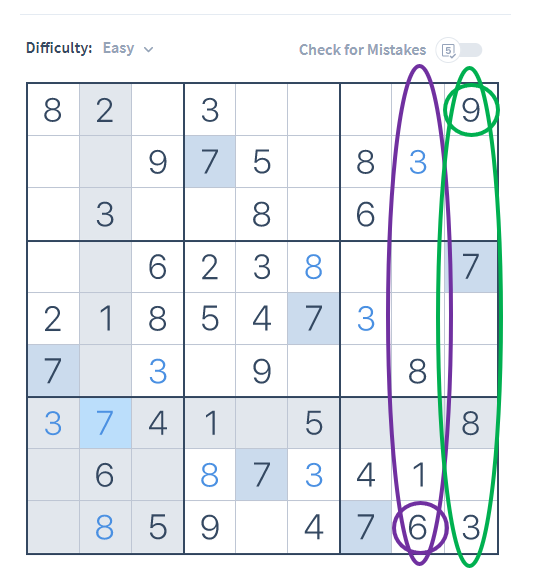 Looking at our restrictions, we can see that the number 6 cannot go into the leftmost box, and the number 9 cannot go into the rightmost box in our middle row. We can now confidently fill in those two boxes! Try using the same logic to fill in the 3x3 box in the middle. We know that the box will have one of each digit 1-9, so we are missing the numbers 1 and 6. Looking at the grid below, can you place those two numbers in the middle square? 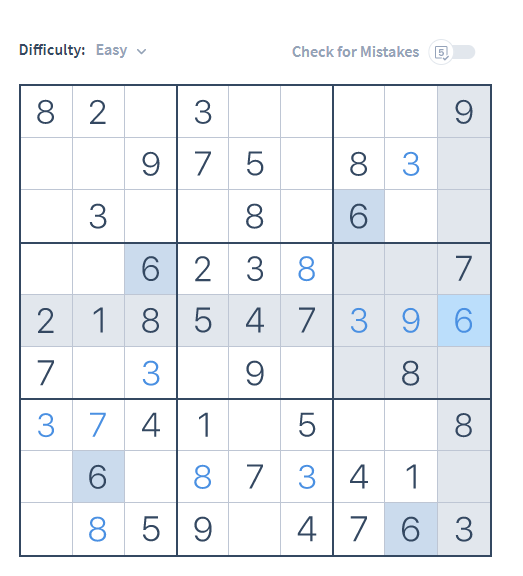 Yes! We see that the number one is restricted from going into the bottom left because of the 1 already existing in the same row. We can now finish filling in that middle square. 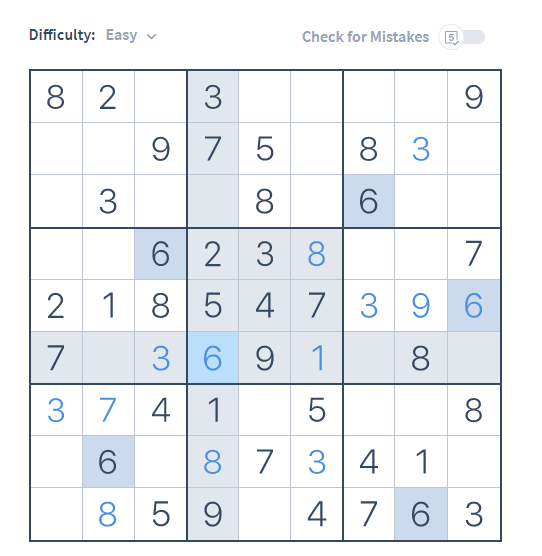 At this point, you should be able to use the logic techniques you’ve learned so far to finish filling your grid! Here is the completed puzzle: You can find tons of free sudoku puzzles at varying difficulties online at:

Or, check out your daily newspaper! There is always a daily Sudoku challenge in the Living section next to the crosswords. If you don’t get the paper delivered to your home, you can drop by any St. Tammany Parish Library branch to make a copy!