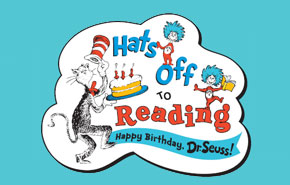 On March 2, 2018, libraries and classrooms across the country will be celebrating Dr. Seuss's birthday and Read Across America Day. Our children's department has a ton of events scheduled all over the parish. Over his career, Dr. Seuss wrote at least 42 books, but he also worked as an ad man, on films for the army during World War II, and created his own art.

Dr. Seuss or Theodore Geisel wrote his first book, And to Think That I Saw It on Mulberry Street,  in 1936 on an ocean voyage to Europe. He was initially bothered by the sound of the vessel's engine, but his wife suggested he use the noise as inspiration and it served as the cadence for the book, which was initially rejected by 27 publishers. However, he wrote another four books by 1940. During World War II Geisel worked on animated training movies, some of which earned Academy Awards.

However, two of his most famous books were the result of interesting challenges:

In 1954 John Hersey wrote an article in Life magazine, "Why Do Students Bog Down on First R," lamenting the poor state of literacy among American children. He suggested the problem was a lack of interesting reading primers for children and that Howard Pule, Walt Disney, and Dr. Seuss could help solve the problem. Geisel's publishers gave him a list of 600 vocabulary words recommended by literacy experts and asked him to use 250 of them in a new book. It took him 9 months, but he used just 236 words in the 1,600-word story The Cat in the Hat.

Green Eggs and Ham was the result of Random House publisher Bennett Cerf betting Geisel he couldn't write a book using only 50 words.

But Dr. Seuss isn't just for kids. On his 82nd birthday (March 2, 1986), he published You're Only Old Once!  A perhaps too accurate account of a day at the doctor's office—from Spleen Readjustment to Muffler Repair and including stops all along Stethoscope Row.

To learn more about Dr. Seuss, check out one of these great titles:

Learn more about the life and work of the man who inspired us all to read and rhyme, one fantastic book at a time.