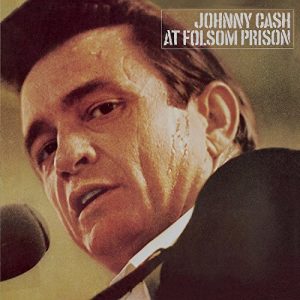 This month we celebrate the fiftieth anniversary of Johnny Cash's live album At Folsom Prison. Although the album was released in May 1968, it was recorded during two shows, at 9:40 AM and 12:40 PM, at the California prison on January 13, 1968.

Cash's career was at a low point after his prolonged battle with substance abuse, but he was ready to clean up his act. He had played prisons before, including a 1966 concert at Folsom Prison, and he wanted to record a live album there or at San Quentin. Columbia, his record label, was not initially on board with the idea.

However, Bob Dylan's producer Bob Johnstone made sure the record happened and served as its producer. After two days of rehearsals the concert opened with Carl Perkins and the Statler Brothers before Cash, backed by the Tennessee Three, took the stage. June Carter would also take the stage to sing with Cash.

Both shows began with "Folsom Prison Blues" and ended with "Grey Stone Chapel," which was written by Glen Shirley, a Folsom inmate convicted of a bank robbery. The prison chaplain had given a recording of the song to Cash the night before the concerts.

The majority of the album, fifteen of seventeen tracks, were ultimately taken from the first show of the day, and the album was a hit in the United States, reaching number 1 on the country charts and the top 15 of the national album chart. The lead single from the album, a live version of "Folsom Prison Blues," was a top 40 hit, Cash's first since 1964's "Understand Your Man."

Don't forget to check out the album to hear some of the definitive versions of Cash's classic songs:

Or pick up The Essential Johnny Cash.

To learn more about the Man in Black check out his autobiography, Robert Hilburn's biography, or the film featuring Joaquin Phoenix as Johnny Cash and Reese Witherspoon as June Carter.