Illustrator Floyd Cooper was way too young at 65 to go. His gorgeous illustrations have enchanted children and adults for four decades and won numerous awards, including the 2009 Coretta Scott King Illustrator Award Winner for The Blacker the Berry, a book of poetry written by Joyce Carol Thomas. One of my favorites is A Beach Tail, a reassuring story about a clever boy’s mild adventure at the beach written by Karen Lynn Williams.  The palette is mostly shades of tan, ochre, and brown. Cooper captures the haze of a warm day at the beach, the grains of sand, and the warmth of the sun. Read a tribute to Cooper at TheBrown Bookshelf blog, opens a new window. You can learn how he used erasers to create his beautiful works of art at this New York Times’ Facebook live video from 2017. 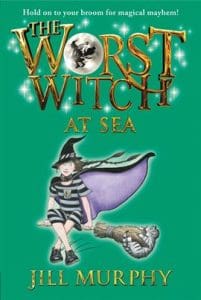 Jill Murphy wrote and illustrated mostly in the 1980s and 1990s and was known for her Large Family (a family of elephants) and Worst Witch series.

My favorite book by her is the picture book Five Minutes' Peace, about Mrs. Large and her attempt to take a nice hot bath — by herself. As any mother knows, this is not easily done.This book was always a favorite in storytimes. I think the moms enjoyed it even more than the kids! Murphy's illustrations are warm, familiar, and comfortable.

Two of Murphy's books were runners up, or "commended", for the Kate Greenaway Award, which is Britain's equivalent to the Caldecott. Before there was Hogwarts there was Miss Cackle’s Academy for Witches. Murphy's chapter book series about student witch Mildred Hubble and her adventures and tribulations in witch school are funny and great for readers just getting into chapter books. NPR has a nice obituary here.

If you were a kid in the 80s and 90s you might remember Patricia Reilly Giff’s series the Polk Street School about a second-grade class. Giff wrote from experience as a reading teacher and addressed some kids’ struggles with reading. In fact, she didn’t start writing for kids until she was in her 40s. In addition to popular series, Giff also wrote what we call in kid lit world “middle grade fiction.” Her books for ages 10-14 were often historical fiction such as the Newbery Honor book Lily's Crossing about a girl in 1944 New York during World War II. She befriends a boy who is a Hungarian refugee. Giff was also awarded a Newbery Honor book for Pictures of Hollis Woods a beautifully written, funny, yet poignant book about a 12-year-old girl in foster care. Giff had a real understanding of young people and wrote characters that kids can relate to. Publisher’s Weekly posted an extensive obituary that you can read here.

While each new year brings new authors and illustrators to marvel at and recent stars continue to put out new work, these masters will be missed. But, how lucky are we that we can continue to enjoy their work.

How lucky is the St. Tammany Parish Library to continue to share their work with future generations of children?