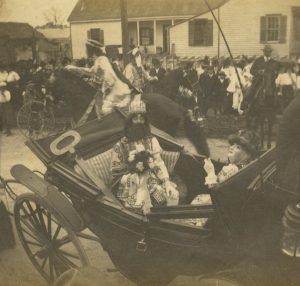 We’re in the midst of another Carnival season, happily stuffing ourselves with king cake, begging for beads at parades, and putting the final touches on our costumes for Mardi Gras Day. But before we entirely lose ourselves in daydreams of marching bands and doubloons, it’s worth taking a look back at the early days of Covington’s Carnival celebrations.

Mardi Gras was first celebrated in Covington on February 25, 1879. According to the St. Tammany Farmer, Rex, played by Lord Tinker, led a procession of figures including a band in a green chariot, a “white knight of the dark ages,” Commodore Bombazine, Count Oatsack, and a “lady in white.” This afternoon parade was followed by an evening parade; later, maskers visited people’s homes and “performed tableaux and ‘heavy tragedy’ to the infinite amusement of the spectators.”

In 1892, Rex was presented with the “keys of the realm”, and again led a parade which featured Boeuf Gras, a 3800-pound bull; a cage of “lively” monkeys; and the Royal Silver Cornet Band. A ball was held after the parade featuring an “endless variety of costumes, from the charming fairy nymph to the grotesque clowns.” The festivities were dampened somewhat by the murder of the Deputy Sheriff W. H. Cook, who was shot five miles from town, having attended the parade earlier in the day.

The parade of 1907 was organized by the Business League, and, accordingly, was more focused on industry, retail and politics. The parade featured local businesses, such as V Planche, Grocery; Porter’s 5 & 10; Gaston Galmiche, Confectionary; William Iben, Cabinetmaker; Poole Brothers, Livery; and the St. Tammany Banking Company. In what may have been a curious display, Carl Kuby paraded while “making sausages from a live dog.” The parade was also attended by the Lieutenant Governor, Jared Y. Sanders, who made a rousing speech at the Courthouse grounds. Professor Eckhert entertained the crowd with a tightwire walk, a balloon ascension and a parachute leap. To close out the day, a grand masquerade ball was held at the Covington Amusement Company Rink. 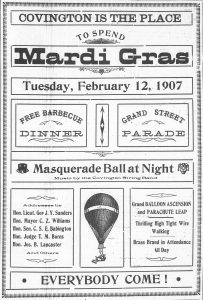 In 1909, the King arrived in Covington aboard the Steamer Josie, where he was greeted by a cheering crowd, and then escorted to the courthouse where he was presented with the keys to the city. The parade that year was a collaboration between Covington and Abita Springs, featuring royalty and floats from each town. The elaborate floats included a representation of the North Pole, a pyramid of furniture (with women and children on each seat) provided by L. M. Bourgeois, a Dutch beer garden from which riders handed out pretzels and sausage, and a miniature version of the St. Tammany Banking Company building, with a bank teller that handed out copper pennies to the crowd. 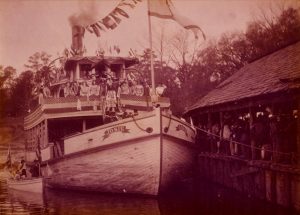 1911 marked the last large-scale Mardi Gras celebration held in Covington for many years. It was put on by the Kovington Karnival Klub, and their signature colors of yellow, red, and purple could be found all over the city in bunting, flags, and ribbons. The King held the title of Chief Tamanend and, accordingly, the parade had an Indian theme. Each float depicted an Indian legend or scene, including Pere Rouquette teaching underneath an oak tree, Ochakwa burning at the stake, the capture of the alligator Chinckapin, and the rainbow necklace of Helonia. This was the most widely attended Carnival thus far, with 7,000 or 8,000 attendees--a truly epic celebration.

All quotations from the St. Tammany Farmer (Covington, La.)