The National Book Awards, opens a new window were held in New York on Wednesday, November 14, 2018. Established in 1950, the awards celebrate the best writing in America and currently honor the best fiction, nonfiction, poetry, translated literature, and young people's literature published each year. 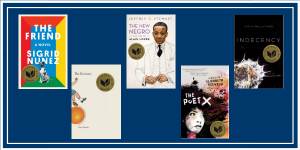 Publishers nominate titles, and books in each category are judged by a panel of distinguished writers, translators, critics, librarians, and booksellers. This year more than 1,600 books were nominated. The judging panels develop their own criteria each year, but the book must have been initially published by a US-based publisher.

Each judges panel selects a longlist of ten titles in each category. The list is then narrowed down to the top-five finalists, and a winner is announced in the fall. This year's winners included:

The National Book Foundation also announced the recipient of the Medal for Distinguished Contribution to American Letters (DCAL)—Isabel Allende, opens a new window. She is the first Spanish-language author to receive the award. Allende has written more than two dozen books, including The House of the Spirits, opens a new window. You can find a full list of her titles available from the library on our website, opens a new window.