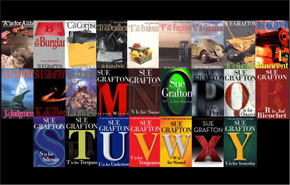 The first P.I. Millhone novel, A Is for Alibi, appeared in 1982 and was part of new wave of mysteries featuring female protagonists. That same year Sara Paretsky published her first V. I. Warshawski book, Indemnity Only. Grafton's books helped to reshape the world of hardboiled mysteries and breathed new life into the genre.

One of the signature differences of Grafton's books with those that came before was her attention to the "human and emotional remifications" of violence. In a 1985 interview, she told the New York Times: “Most of the hard-boiled male detectives go through murder and mayhem, and it has absolutely no impact on their personalities. I find it more interesting to see what the constant exposure to violence and death really does to a human being, how a person incorporates that into their psyche.”

Grafton published Y Is for Yesterday in August, and that will be the last book in the series. Though Grafton had the title for the 26th book, Z Is for Zero, she had not begun work on the book due to her illness. In the words of her daughter Jamie Clark, "The alphabet now ends at Y."

To learn more about Sue Grafton and her detective Kinsey Millhone, check out Kinsey and Me.

Or revisit the entire series: