Today, June 19th, commemorates the official end of slavery in the United States. Although the Emancipation Proclamation had been issued on January 1, 1863, it took two years for the news to reach Texas, where the proclamation was read aloud by Major General George Granger. The date of his reading - June 19, 1865 - has since become the rallying point for a holiday that is now recognized by 41 states.

Genealogical research into records of slavery can be difficult, but not impossible, and a significant portion of records have been digitized and are available online. This article will discuss various record types, and will highlight some individual sources for Louisiana records that shed light on slavery and enslaved people.

In 1807, a law was passed which banned the transatlantic slave trade to the United States, effective January 1, 1808. As a result of the law, enslaved people could still be bought and sold within the United States, but slave-carrying vessels were required to create a manifest listing the names of the enslaved when entering or leaving a port. These manifests can include a slave's name, age and height, as well as their owner's name and residence. For the port of New Orleans, slave manifests have been indexed and are available from 1807 to 1860 on Ancestry and FamilySearch.

A manumission is a formal emancipation from slavery, issued by a slaveowner, or by a third party who may have purchased an enslaved person in order to free them. Manumissions can contain the slave's name, family relationships, the birthplace of the slave's mother, the identity of the freer and their relationship to the slave, the reasons for manumission and the method and/or cost of manumission. An online database of manumissions in Louisiana is available covering 1719-1820 on Ancestry. Owners also sometimes submitted petitions for the emancipation of their slaves. The New Orleans Public Library has an index to the petitions, viewable here, opens a new window.

Probate records, which document the settlement of the estate left behind when someone dies, may include inventories of that person's estate - which may include enslaved people. Or, a will contained in a probate record may document the dispersal of slaves to other family members or acquaintances. Similarly, deeds, acts of sale or receipts record the transfer of an enslaved person to another owner, or to a slave trader. Marriage contracts sometimes include inventories of property, including slaves. The best place to find legal records will be the relevant parish courthouse, although some records have made their way into archives and libraries. It is also worth checking Ancestry and FamilySearch for digitized records.

For the 1850 and 1860 federal census, a slave schedule was also filled out by the census enumerator.The slave schedule lists slave-owners by name, and then lists their slaves by age, gender, and race (black or mulatto). It identifies the number of slaves owned, and the number of slaves manumitted (this can be a clue leading to the consultation of manumission documents). It also identifies whether a slave is a fugitive, or deaf, dumb or blind. The number of slave dwellings is also noted. The schedule does not list slaves by name. These schedules have been digitized and are available on FamilySearch, Ancestry and Heritage Quest.

If you are able to determine who owned an enslaved person, and the plantation on which they may have been enslaved, one avenue is to look for archival records from that particular plantation. Logbooks, correspondence, diaries and ledgers all may contain useful clues. These records may be found in an archives, a museum or a parish historical society. For more guidance on researching plantation records, contact the genealogy librarian at genealogy-covington@stpl.us, opens a new window.

The Freedmen's Bureau was established in 1865 to provide assistance to former enslaved people, as well as white people living in poverty, in southern states and the District of Columbia. Records of the Bureau can include censuses as well as information about the housing, health, marriage and education of formerly enslaved people. Records of the Bureau are available through Ancestry and FamilySearch. 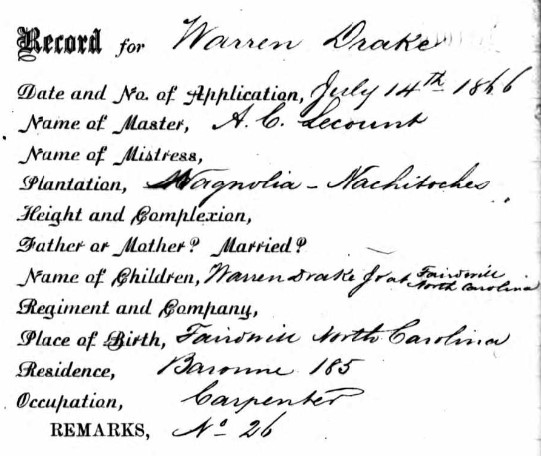 The Freedman's Savings and Trust Company, founded in 1865 and popularly known as the Freedman's Bank, was created to be a savings institution in which former enslaved people and their descendants could deposit their money. It did not issue loans. An account with the Freedman's Bank represented the first-ever bank account for many African Americans. The bank collected a significant amount of information on each of its depositors, including name, place of birth, complexion, birthplace, place raised, occupation, spouse, and parents' names. For some, the depositor record even includes a death certificate. In the early days of the bank, the name of the former slave owner and their associated plantation is recorded. Records for the Bank are available through FamilySearch, Ancestry and Heritage Quest.

An act in 1871 made it possible for residents of southern states, including Louisiana, to file claims for property damage or loss by Union troops during the Civil War. Enslaved people sometimes testified on behalf of their former owners in support of a claim, or filed claims for their own lost property. An index to the claims, as well as the allowed and disallowed claims, is available on Ancestry and Fold3.

The Afro-Louisiana History and Genealogy Database, opens a new window, created by Gwendolyn Midlo Hall, provides access to historical data for over 100,000 slaves who were brought to Louisiana between the 1700 and 1800s. Hall compiled records from archives in the United States, France and Spain; information presented in the database includes "African slave names, genders, ages, occupations, illnesses, family relationships, ethnicity, places of origin, prices paid by slave owners, and slaves' testimony and emancipations."

In 1937 and 1938 the Federal Writers' Project collected narratives from men and women who had formerly been enslaved. These narratives were published and eventually digitized. None of the interviews were conducted in Louisiana, but some of the interviewees lived on plantations in Louisiana. They remain a valuable document for understanding the lived experience of enslaved people.

Free People of Color in Louisiana 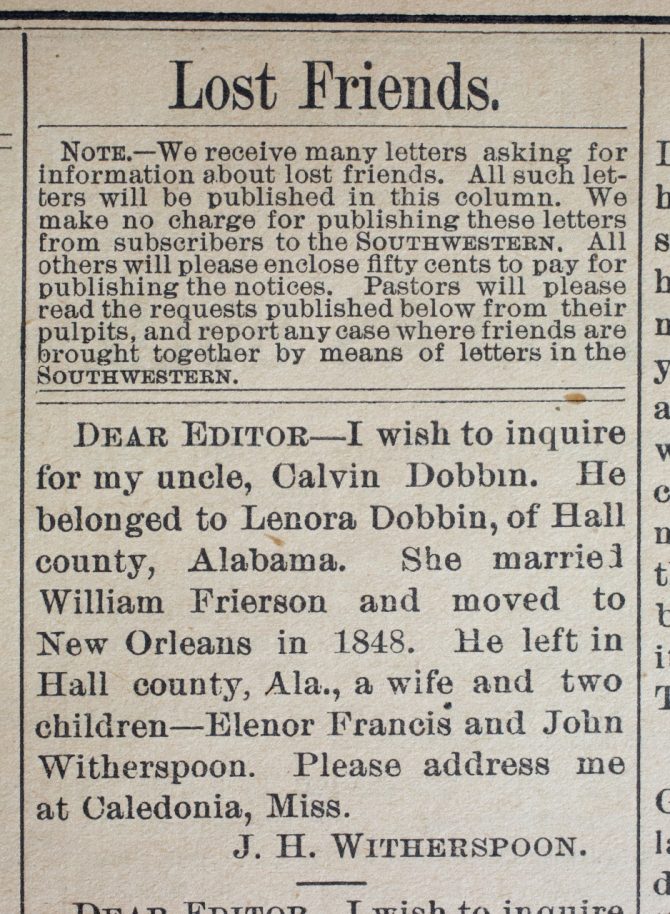 "Lost friends" notices were written by individuals looking for formerly enslaved friends or family members. The notices can include names, descriptions, family groupings, and the names and locations of slaveholders. The Lost Friends Database, opens a new window provides searchable access to notices published in the Southwestern Christian Advocate from 1879-1900, which was read by subscribers in Texas, Louisiana, Mississippi, Tennessee and Arkansas.

In 1838, Georgetown College sold 314 enslaved people to two Louisiana plantation owners, with about 206 sent to Louisiana. This sale raised the equivalent of $3.3 million, allowing Georgetown to pay off its debts, and helping it to grow into a university. The facts of this sale came to light in 2015, resulting in a formal apology from the university. The GU272 Memory Project, opens a new window organizes the 314 enslaved people into 49 family groups, and provides genealogies and family trees for each group.

This website provides an index of some of the largest slaveholders, opens a new window recorded in 1860, and then couples that information with matching African American surnames, as recorded in the 1870 census. Browsing by county or parish allows you to zero in on a potential match between a slaveholder and a former enslaved person.