May Day marks the return of spring after the chill of winter. May Day is a European combination of two holidays: the Roman celebration Floralia, in which Romans picked flowers in honor of the goddess of spring; and the Celtic celebration Beltane which is held on May 1 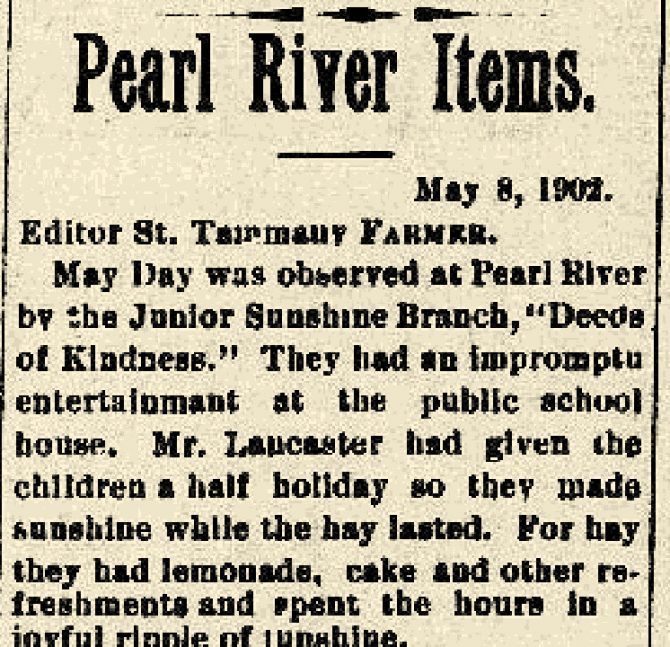 and believed to be a period when fairies were most active.

In the United States, May Day was (and still is) celebrated largely by children, who would gather flowers, wear flower crowns, or dance around a Maypoles. At some parties or picnics, a May Queen was selected, and songs were sung.

The earliest mention of May Day in the St. Tammany Farmer appears in 1879, with a co 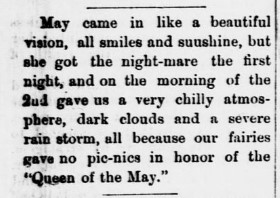 mment attributing bad weather on May 2nd to the fact that no picnic had been held to honor the Queen of May. Over the years, May Day in St. Tammany was celebrated by schools and individuals with picnics where children wore flowers and danced around Maypoles. An 1880 picnic had a song written for it that celebrated the arrival of spring. In 1895, the Merry Makers held a picnic at Sulphur Springs and an evening dance; also in 1895, the students at St. Francis Xavier celebrated May Day with a picnic instead of a steamboat ride to New Orleans due to the fear of disease that was currently present in the city. In 1902, students in Pearl River were given a half day off school to drink lemonade and eat cake. And 1921 brought about the reign of Miss Carroll Caulfield as Queen of the May Festival.

All clips from the St. Tammany Farmer, accessed via NewspaperArchive. 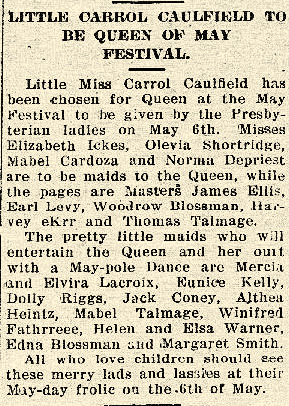