This is part one of a series of blog posts on Father Adrien Rouquette, the poet-priest known as Chata-Ihma.

Dominique Rouquette, a wealthy wine merchant, was a native of Fleurance in Gers, France. He left France during the "Reign of Terror" and emigrated to New Orleans, where he met and married Louise Cousin, daughter of Francois and Catherine Cousin. They married on November 20, 1805; Louisiana had become a territory of the United States two years prior.

Louise gave birth to Adrien Emmanuel Rouquette on January 6, 1814, in New Orleans. At the time of his birth, the Rouquette family was living at 413 Royal Street. The railing of this building, now home to Moss Antiques, still features the initials "DR" in its ironwork. The Rouquette family purchased land on Bayou St. John and moved to a property there. In 1819, Dominique Rouquette committed suicide; his body was recovered in the Mississippi River.

Adrien Rouquette had a familiarity with Choctaw Indians from an early age. In recollections published in 1882, he remembered there being more Indians in the city than any other race. Next to the family property in 1820, Bayou St. John was "lined with their encampments". And he recalled that "when they were intoxicated I heard their songs as they reeled along through the streets...their faces painted blue and a bright red". He had a clear fascination for and appreciation of the Indians, who in the following years eventually left the city for St. Tammany and Washington parishes.

Louise Cousin's family owned land on the North Shore of Lake Pontchartrain, along Bayou Lacombe, and Adrien Rouquette also spent time there, exploring the pine woods and bayous. Here, too, he mingled with the Choctaw, and must have been exposed to more of their language and culture as a child.

As the son of a wealthy family, Rouquette was sent to the College D'Orleans at the age of 8; this was the first institution of higher learning in the city of New Orleans. For college he was sent to Transylvania University, in Kentucky. He also was educated in Philadelphia, Pennsylvania. After his mother's death, he was sent by his guardian to continue his studies at the College Royal in Paris, supposedly to reinforce his mastery of the French language which had waned with too much exposure to English. He transferred to the College de Nantes and graduated from the College de Rennes in Brittany at the age of 20. 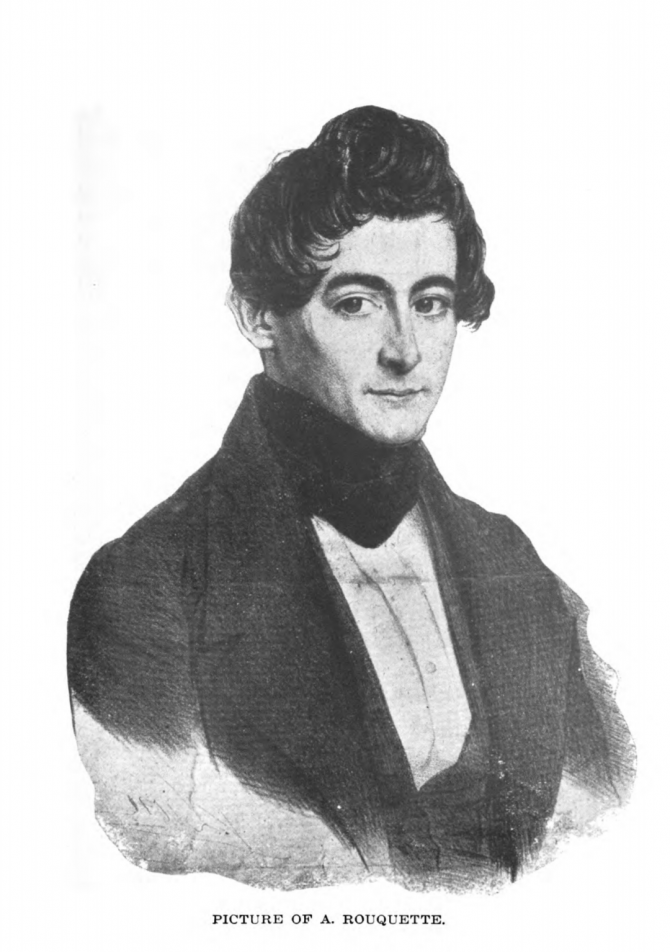 He returned to New Orleans and to St. Tammany in 1833. On his return voyage, which took fifty-two days, there were two passengers who were members of the Order of Mount Carmel. He later credited his time with them as a moment when "the first spark of divine grace entered his soul". After spending some time in Louisiana, again visiting with the Choctaws, he returned to Paris to study law. He did not find the law engaging and did not complete his studies. After a brief visit back to Louisiana, he returned to Paris and began to write poetry. These early poems were written in French and were inspired by, among other things, his love for his mother, and his memories of the bayou. His first book of poems, Les Savannes, was well-received. After publishing two more books, he returned to New Orleans in 1843, on the precipice of a major change in his life.