The library's catalog will be unavailable from 7 to 9 a.m. on Sunday, September 20, for scheduled maintenance. We apologize for the inconvenience. 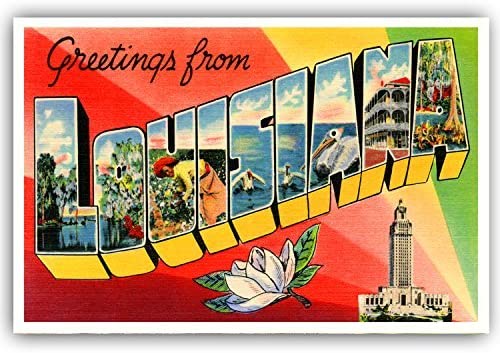 This summer, if you find yourself craving books with compelling stories and larger-than-life figures, you may want to do some reading in Louisiana history. The history of Louisiana is colorful, to put it lightly: full of out-sized egos, flashes of conflict, and incredible culture. In many cases, the truth of many historical Louisiana episodes would seem like fiction, had it not actually happened that way.

Included on the list of recommendations below are the stories of a German slave girl, a governor committed to a mental institution, a voodoo queen, a race riot, a prison guard, the so-called "Banana King", a cartoonist, and Satchmo himself.

"The fascinating untold tale of Samuel Zemurray, the self-made banana mogul who went from penniless roadside banana peddler to kingmaker and capitalist revolutionary. When Samuel Zemurray arrived in America in 1891, he was tall, gangly, and penniless. When he died in the grandest house in New Orleans sixty-nine years later, he was among the richest, most powerful men in the world. "

"Shane Bauer...hired on as a guard in 2014 at Louisiana's Winn Correctional Center, a private prison run by Corrections Corporation of America (now CoreCivic). Equipped with a hidden camera and recorder, he found a snake pit of exploited labor and substandard correctional services." American Prison uses Bauer's experience to delve into the history of the private prison system, and illustrate its current excesses.

The Last Madam uses interviews with Wallace and original research to tell an important story about vice in New Orleans. "In 1916, at age fifteen, Norma Wallace arrived in New Orleans. She quickly went from streetwalker to madam and by 1920 had opened what became a legendary house of prostitution. There she entertained a steady stream of governors, gangsters, and movie stars until she was arrested at last in 1962."

"This rich story of the emergence of the Crescent City from its unlikely floodplain site is the best history of early New Orleans ever written."

An account of Louis Armstrong's life in New Orleans, as told by Armstrong himself. "This raucous, rich tale of his early days in New Orleans concludes with his departure to Chicago at twenty-one to play with his boyhood idol King Oliver, and tells the story of a life that began, mythically, on July 4, 1900, in the city that sowed the seeds of jazz."

"Through interviews, photographs, and writing, Coming Out the Door for the Ninth Ward brings readers into the world of second lines, brass bands, Magee's Lounge, and the ties that bind."

"Showdown in Desire portrays the Black Panther Party in New Orleans in 1970, a year that included a shootout with the police on Piety Street, the creation of survival programs, and the daylong standoff between the Panthers and the police in the Desire housing development."

A vibrant history of one of America's most famous streets. "Richard Campanella’s comprehensive cultural history spans from the street’s inception during the colonial period through three tumultuous centuries, arriving at the world-famous entertainment strip of today."

"In Dixie Bohemia John Shelton Reed introduces William Faulkner's circle of friends -- ranging from the distinguished Sherwood Anderson to a gender-bending Mardi Gras costume designer -- and brings to life the people and places of New Orleans in the Jazz Age."

"Jason Berry...explores the intriguing mystery of Black Hawk's place in the canon of Spiritual saints. In doing so he recounts the fascinating story of the church and the latter day followers of Mother Anderson in contemporary New Orleans. His haunting narrative is a historical detective story that encompasses the biography of Black Hawk, Leafy Anderson, and the remarkable circle of disciples around her, such as the benevolent Mother Catherine Seals, whose haven for illegitimate children and unwed mothers was called the Temple of the Innocent Blood.

Five Days at Memorial recounts how one Louisiana hospital weathered Hurricane Katrina, and documents the legal aftermath. "Sheri Fink reconstructs 5 days at Memorial Medical Center and draws the reader into the lives of those who struggled mightily to survive and to maintain life amid chaos."

"The creator of the greatest comic strip in history finally gets his due--in an eye-opening biography that lays bare the truth about his art, his heritage, and his life on America's color line. "

"Using slave narratives, court records, planters' letters, and more, Walter Johnson enters the slave pens and showrooms of the New Orleans slave market to observe how slavery turned men and women into merchandise and how slaves resisted such efforts to steal their humanity."

The Earl of Louisiana covers Earl Long's tumultuous last year in politics. It "recreates a stormy era in Louisiana politics and captures the style and personality of one of the most colorful and paradoxical figures in the state's history. "

"Louisiana, 1843: a German immigrant thinks she recognizes a young slave girl as the long-lost daughter of her German friend, but the girl has no memory of such a past, and her owner refuses to free her. In novelistic detail, historian John Bailey reconstructs the exotic sights, sounds, and smells of mid-nineteenth-century New Orleans, an 'infernal motley crew' of cotton kings, decadent river workers, immigrants, and slaves."

"A vibrant and immersive account of New Orleans' other civil war, at a time when commercialized vice, jazz culture, and endemic crime defined the battlegrounds of the Crescent City. Empire of Sin re-creates the remarkable story of New Orleans' thirty-years war against itself, pitting the city's elite 'better half' against its powerful and long-entrenched underworld of vice, perversity, and crime."

In 1900, Robert Charles shot 27 white people in New Orleans, sparking a riot and a manhunt. "With the few clues available, William Ivy Hair has pieced together the story of Charles, a man whose life spanned the thirty-four years from emancipation to 1900—a man who tried to achieve dignity and self-respect in a time when people of his race could not exhibit such characteristics without fear of reprisal."

I Hear You Knockin' features "colorful and informative portraits of more than two dozen important New Orleans Rhythm and Blues figures. In most cases, the subjects tell their own stories, sharing their successes and joys, as well as their failures and sorrows."

"Voodoo Queen brings the improbable testimonies of saints, spirits, and never-before-printed eyewitness accounts of ceremonies and magical crafts together to illuminate the lives of the two Marie Laveaus, leaders of a major, indigenous American religion."

The World That Made New Orleans "charts the development of New Orleans, from European colonization through the Haitian revolution (which was crucial to French and American negotiations over Louisiana) to the Louisiana Purchase. Central to his account are the African slaves, who began arriving in New Orleans in 1719, and their contributions to the city's musical life."