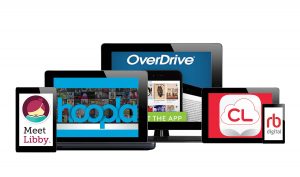 Long before the Kindle or the iPad, eBooks were envisioned by a man named Robert Brown, opens a new window.  In his 1930 manifesto, he suggested: “The written word hasn’t kept up with the age. The movies have outmaneuvered it. We have the talkies, but as yet no Readies.” He advocated for a reading machine that would allow him to read 100,000 words in ten minutes.

One of the first functional "eBooks" was created by a Spanish schoolteacher named Angela Ruiz Roblez. Her Enciclopedia Mecánica, opens a new window was designed so students could study at home without carrying multiple heavy school books. Inside the seafoam green cover were multiple scrolls that could be changed out, and it even allowed the user to zoom in and turn to exact locations—an early form of hypertexts, opens a new window. She patented the invention but could never find anyone to finance the project. Her invention was recently featured in a Google Doodle in 2016, opens a new window and the Espacio Fundación Telefónica, opens a new window has an online exhibit featuring the encyclopedia (though the text is in Spanish, there are some excellent pictures and a fascinating interactive virtual tour of the book).

In 1971 Michael Hart, opens a new window at the University of Illinois started Project Gutenberg, opens a new window, which makes books that are no longer under copyright available to the public in digital editions. The first work he digitized was the Declaration of Independence, opens a new window. He originally envisioned a digital library of 10,000 free titles, but today the collection includes over 54,000 titles—most of which are digitized and proofread by volunteers.

After viewing the "Reading the World: Tablet to Tablet", opens a new window exhibit at the Mandeville Branch, we were trying to remember the first time we ever heard of an eBook. For many of us, it was Stephen King's Riding the Bullet, which was only available in digital form—you can find a print version today in his short story anthology Everything's Eventual. Back then most people didn't have an eReader and read it on the computer. One reference librarian vividly remembers that her high school physics teacher printed it out on his dot matrix printer (it took hours). However, within the first 24 hours that Riding the Bullet was on sale, it was downloaded 400,000 times.

On the Activity Table at the Mandeville Branch this week, you can make your own basic pop-up book. We found the activity in one of our fantastic eBooks available from Hoopla: Making Books With Kids.