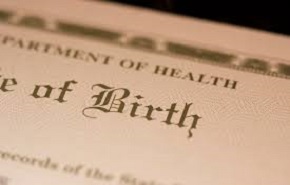 In most states, local governments did not require births to be recorded until the early 1900s. Birth records have the following information: