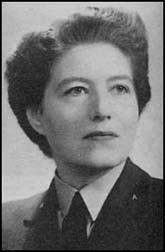 Vera Atkins was born Vera Maria Rosenberg in Galați, Romania, to Max Rosenberg, a German-Jewish father, and his British-Jewish wife, Zeffro Hilda, known as Hilda. She briefly attended the Sorbonne in Paris to study modern languages and a finishing school at Lausanne, where she indulged her passion for skiing, before training at a secretarial college in London. During her somewhat-gilded youth in Romania, where she lived on the large estate bought by her father at Crasna (now in Ukraine), Atkins enjoyed the cosmopolitan society of Bucharest where she became close to the anti-Nazi German ambassador, Friedrich Werner von der Schulenburg. Atkins' father, a wealthy businessman on the Danube Delta, went bankrupt in 1932 and died a year later. While in Romania, Atkins came to know several diplomats who were members of British Intelligence, some of whom were later to support her application for British nationality, and to whom in view of her and her family's strong pro-British views, she may have provided information as a "stringer". She also worked as a translator and representative for an oil company. Atkins remained with her mother in Romania until emigrating to Britain in 1937, a move made in response to the threatening political situation in Europe and the growing extremism and antisemitism in Romania.

Though not a British national, in February 1941 Atkins joined the French section of the SOE as a secretary. She soon was made assistant to section head Colonel Maurice Buckmaster, and became a de facto intelligence officer. She served as a civilian until August 1944, when she was commissioned a Flight Officer in the Women's Auxiliary Air Force (WAAF). In February 1944 Atkins was naturalized as a British subject. She was later appointed F Section's intelligence officer (F-Int). Atkins' primary role at SOE was the recruitment and deployment of British agents in occupied France. She also had responsibility for the 37 women SOE agents who worked as couriers and wireless operators for the various circuits established by SOE. Atkins would take care of the "housekeeping" related to the agent, such as checking their clothing and papers to ensure they were appropriate for the mission, sending out pre-written innocuous letters at regular intervals, acting as SOE's liaison with their families and ensuring they received their pay. Atkins would often accompany agents to the airfields from which they would depart for France, and would carry out final security checks before waving them off. Atkins always attended the daily section heads meeting chaired by Buckmaster, and would often stay late into the night at the signals room to await the decoded transmissions sent by agents in the field. She would usually arrive at F Section's Baker Street office around 10.00 am. Although not popular with many of her colleagues, she was trusted by Buckmaster for her integrity, exceptional memory and good organizational skills.

After the liberation of France and the allied victory in Europe, Atkins went to both France, and later, for just four days, Germany, where she was determined to uncover the fates of the fifty-one still unaccounted for F Section agents, of the 118 who had disappeared in enemy territory (117 of whom she was to confirm had died in German captivity). Originally, she received little support and some opposition in Whitehall, but as the horrors of Nazi atrocities were revealed, and the popular demand for war crimes trials grew, it was decided to give official support for her quest to find out what had happened to the British agents, and to bring those who had perpetrated crimes against them to justice. At the end of 1945 SOE was wound-up, but in January 1946 Atkins, now funded on the establishment of the Secret Intelligence Service (MI6), arrived in Germany as a newly promoted Squadron Officer in the Women's Auxiliary Air Force to begin her search for the missing agents, including 14 women. She was attached to the war crimes unit of the Judge Advocate-General's department of the British Army HQ. Until her return to Britain in October 1946, Atkins searched for the missing SOE agents and other intelligence service personnel who had gone missing behind enemy lines, carried out interrogations of Nazi war crimes suspects, and testified as a prosecution witness in subsequent trials. In November 1946 Atkins' commission was extended so that she could return to Germany to assist the prosecution in the Ravensbrück trial which lasted into January 1947. She used this opportunity to complete her search for Noor Inayat Khan, who she now knew had not died at Natzweiler-Struthof, as she had originally concluded in April 1946, but at Dachau. As well as tracing 117 of the 118 missing F Section agents, Atkins established the circumstances of the deaths of all 14 of the women, twelve of whom had perished in concentration camps. She had also persuaded the War Office that the twelve women, technically regarded as civilians, who had been executed, were not treated as having died in prison, as had been originally intended, but were recorded as killed in action. Atkins' efforts in looking for her missing "girls" meant not only did each now have a place of death, but by detailing their bravery before and after capture, she also helped to ensure that each received official recognition by the British Government, including the award of a posthumous George Cross to both Violette Szabo in 1946 and, especially due to Atkins's efforts, Noor Inayat Khan in 1949.

She went to work for UNESCO's Central Bureau for Educational Visits and Exchanges, as office manager from 1948, and director from 1952. She took early retirement in 1961, and retired to Winchelsea in East Sussex. Atkins was appointed CBE (Most Excellent Order of the British Empire) in the 1997 Birthday Honours, a time around the Queen’s birthday where she honors important British citizens. She was awarded the Croix de Guerre in 1948 and made a Knight of the Legion of Honour by the French government in 1995. Atkins died in hospital in Hastings on 24 June 2000, aged 92. She had been in a nursing home recovering from a skin complaint when she fell and broke a hip. She was admitted to hospital where she contracted MRSA. Her memorial plaque, which is shared with her brother Guy, is in the northern wall at St Senara's churchyard in Zennor, Cornwall where her ashes were scattered. The inscription reads "Vera May Atkins, CBE Légion d'honneur Croix de guerre".

Spies and Intelligence officers in WWII

This list contains non-fiction and fiction accounts of spies and intelligence agencies in WWII.