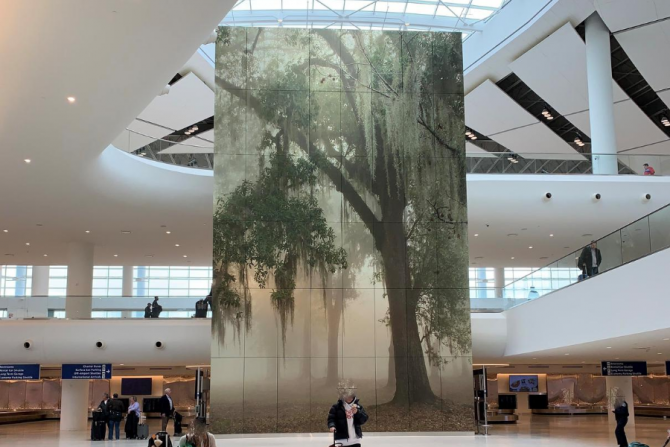 Art is an important part of our society. Art in the form of a photograph can capture a particular moment in time. A master photographer can make the world speak through their lens and open up a new dialogue between you and a sight you may have seen many times elevating it to a new height.

If you've flown lately, you may have noticed the centerpiece photograph on display at the new Louis Armstrong New Orleans International Airport. Lana Gramlich, the award-winning professional female photographer who shot the photo, also works at the St. Tammany Parish Library. Gramlich shot the incredible photo, Trees in Fog, at Fountainebleau State Park.

Gramlich moved around quite a bit before settling here in St. Tammany and has been here for long enough to consider herself a local. Originally from Canada, her photos serve as love songs to the area she has come to know so well.

She has amassed a collection of many awards and accolades with her beautiful and evocative photography. Many sites have displayed her work including multiple "photos of the day/week/month" through The Nature Conservancy, Bracy's Nursery's website, The Crosby Arboretum's calendar, Country Roads Magazine and multiple features by the U..S Fish and Wildlife Service. Gramlich has been published/featured by Outdoor Photographer, Digital Photo Pro, Photographer's Forum, Horticulture and other magazines. She’s also earned gallery placements and shows overseas, including two major shows in London and a permanent placement in a science museum in Paris. Finally, Gramlich has been featured as National Geographic's "Top Shot".

“I started with digital photography in 2008 and worked tirelessly at it until my cancer diagnosis in 2012. Despite my intention to pick it back up after treatment, I began experiencing chronic pain. These days, I'm back where I started- enjoying the beauty of nature without lugging 30+lbs of gear and stopping every 6 feet for a shot,” said Gramlich.