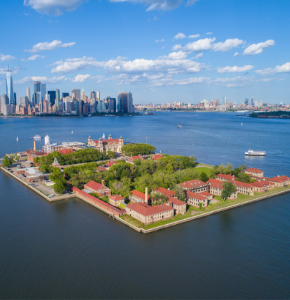 It is located in Upper New York Bay and was the gateway for over 12 million immigrants to the United States. Before opening as an immigration point, the island, known as Oyster Island, was owned in the 1700s by Samuel Ellis, a merchant and farmer. The United States government bought the island in 1808. When the U.S. acquired the island it was initially used as a fort called Crown Fort, later changed to Fort Gibson after the War of 1812. The island remained a military post for nearly 80 years before it was selected to become a federal immigration station.

In the years before Ellis Island opened, the more than 8 million of immigrants that arrived in New York City were processed by officials at Castle Garden Immigration Depot, just across the bay from Ellis Island. On April 18, 1890 the Federal government assumed control of immigration and Congress appropriated $75,000 to construct America’s first federal immigration station on Ellis Island. While the station was under construction, the Barge office nearby at the Battery was used for immigration processing. 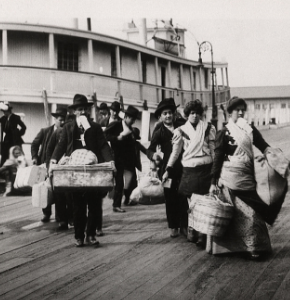 The first station was a three-story building and it opened with fanfare on January 1, 1892. Three large ships landed the first day and 700 immigrants were processed. Almost 450,000 immigrants were processed during the first year. Due to a fire, the second building was built and opened in December 1900. The new buildings were upgraded and made bigger but after they opened the facilities proved barely able to handle the flood of immigrants that arrived the years before World War I.

Between the years 1905 to 1914, and average of 1 million immigrants per year arrived in the United States. Immigration officials reviewed about 5,000 immigrants per days during peak times. Generally people who were approved spent two to five hours at Ellis Island. Arrivals were asked twenty-nine questions including name, occupation, and the amount of money they carried. Those with visible health problems or diseases were sent home or held in the island’s hospitals for long periods of time. About 2% of immigrants were denied entrance to the U.S. and sent back to their countries for reasons such as having a chronic contagious disease, a criminal background, or insanity. Today over 100 million Americans, about one-third to 40% of the population of the U.S., can trace their ancestry to immigrants who arrived in America at Ellis Island.

167th Anniversary of the opening of Ellis Island