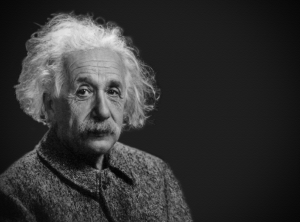 March 14 is not only Pi Day, named for the mathematical constant approximated as 3.14. It is also the birth date of one of the greatest minds in science, Albert Einstein. Born on March 14, 1879 in Ulm, Germany, Einstein would grow to become one of the most notable theoretical physicists in the field. Einstein contributed theories to solve fundamental problems and present new ideas concerning the scientific fields and create a better understanding of how parts of the universe worked. His notable contributions to physics with his theories have created a lasting impact in the world of science, with many of his theories proven true, and some still part of scientific debates today.

What some may not know about Einstein is that despite his huge scientific successes and contributions, he did not have the best education experience. As a boy, Einstein had problems with the strict discipline of the secondary school Luitpold Gymnasium in Munich, despite performing well in his classes. He even dropped out of the school at age 15 to follow his parents to Italy when his father's company failed in Munich and a relative offered a job opportunity to his father in Milan. He finished high school in Aarau, Switzerland in 1896 and was admitted into the Swiss Federal Polytechnic School which was later renamed the Swiss Federal Institute of Technology after becoming a full fledged university. Even when he studied at the Swiss Federal Institute of Technology Zurich, Einstein was known to skip class and rely on the notes of classmates. As a result, despite finishing his coursework, his connections with the university only led him to a job at the Swiss Federal Patent Office in Bern.

It was during his years working at the patent office from 1902 to 1909 that Einstein developed and published some of his most influential theories in science. In 1905, Einstein submitted his dissertation for his Ph.D. degree in physics to the University of Zurich and published multiple papers containing his groundbreaking theories in physics. One paper described Brownian motion, the irregular movement of microscopic particles in a liquid or gas, which led to experimental proof of the existence of atoms. Another paper included the observance of the photoelectric effect, the effect of energy transfer from a beam of light to an electric current; with this publication, Einstein earned the 1921 Nobel Prize in physics. His other notable achievements during this time include his publications on his special theory of relativity, which includes the interchangeability between mass and energy, leading to the famous equation, E=mc2 (E = mc-squared).

These mentioned theories only scratch the surface how Einstein contributed to science with his theories and accomplishments. Einstein’s theories have led to other scientific developments. For example, Einstein's mass-to-energy conversion formula provided the foundation of how to calculate the energy involved in a nuclear reaction. Even today, scientists are debating other theories and ideas from Einstein’s writings. Outside of science, Einstein was a violinist, having learned to play the violin as a child and performed during his whole life. He was also an advocate in political and social issues, notably as a pacifist, opposed to conflict and war. In his last days before his death, Einstein agreed to be part of a document urging nations to give up their nuclear weapons during the height of the Cold War.

To learn more about Albert Einstein, his contributions to science including his own writings, and his legacy, check out the following library sources:

Check these sources out for information about the world-famous physicist Albert Einstein, his work, and the impact he has made in science.