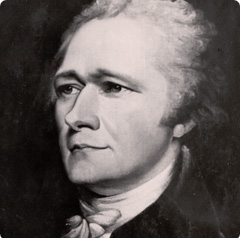 Alexander Hamilton was born January 11, 1757 (or 1755), to James Hamilton, a Scottish merchant, and Rachel Fawcett, in Charlestown, Nevis in the British West Indies. James later abandoned Rachel and when Rachel later contracted yellow fever and died in 1768, Hamilton and his older brother James Jr. were orphaned.

Without his mother, Hamilton became a clerk at the local import-export firms and he proved so capable as a trader that he was left in charge of the firm for five months in 1771, while the owner was at sea. He soon desired a life outside of the island and after a letter he wrote his father was published in the newspaper impressed the local community leaders, they collected enough funds to send Hamilton to the North American colonies for his education.

In October 1772, he arrived by ship in Boston, and from there proceeded to New York City. Hamilton entered King’s College (now Columbia) in the autumn of 1773. He was forced to stop his studies before graduating when the college closed its doors during the British occupation of the city.

In 1775, Hamilton and other King’s College students joined a New York volunteer militia company called the Corsicans. This was the beginning of his military career. By 1777, he participated in the Battle of Princeton, in which he contributed to the American victory over the British. After this, Hamilton refused invitations to become general’s aides believing that his best chance to improve his station in life was glory on the battlefield. However, Hamilton eventually received an offer he felt he could not refuse, to serve as George Washington’s aide.

Hamilton spent four years as Washington’s chief staff aide. He handled letters to Congress, state governors, and the most powerful general in the Continental Army. He also drafted many of Washington’s orders and letters at Washington’s direction. In his position, Hamilton was involved in a wide variety of high level duties, including intelligence, diplomacy, and negotiation with senior army officers as Washington’s emissary.

While on Washington’s staff, Hamilton long sought command and a return to active combat. After resigning from his staff position, he asked Washington and others for a field command. On July 31, 1781, Washington relented and assigned Hamilton as commander of a battalion of light infantry companies of the 1st and 2nd New York regiments and two provisional companies from Connecticut. In the planning of the attack on Yorktown, Hamilton was given command of three battalions, which were instrumental in taking two forts that forced the British to surrender their entire army at Yorktown, Virginia. This was a decisive victory by the Americans and was the last major battle in the American Revolution.

After the war, Hamilton was appointed as a New York representative to the Congress of the Confederation. Hamilton then resigned from Congress and in July 1782 he passed the bar and set up and law practice in Albany. In 1784, he founded the Bank of New York, one of the oldest still-existing banks in America. In 1787, Hamilton was chosen as a New York delegate for the Constitutional Convention, which was held to draft the new U.S. Constitution.  Though Hamilton was still not content with the final Constitution by the end of the Convention, he decided to sign it anyway as it was a vast improvement over the Articles of Confederation. To convince others to sign the new Constitution, Hamilton recruited John Jay and James Madison to write a series of essays defending the proposed Constitution, now known as The Federalist Papers. He wrote 51 of the 85 essays published.

Now President, Washington appointed Hamilton as the first United States Secretary of the Treasury on September 11, 1789. Hamilton would serve in this position until the end of January 1795, when he resigned. In the time he served, Hamilton oversaw his colleagues under the leadership of Washington, and Washington often sought Hamilton’s advice and assistance on matters outside of his treasury department duties. His ideas for the treasury led to the adoption of the Coinage Act of 1782 by Congress, which led to the creation of the United States Mint.

Hamilton’s resignation as Secretary of the Treasury in 1795 did not remove him from public life. He resumed practicing law and remained close with Washington as an advisor and friend. He even helped Washington in the writing of his Farewell Address by writing drafts for Washington.

In the election of 1800, Hamilton decided to throw his support behind presidential candidate Thomas Jefferson, who Hamilton frequently disagreed with and did not like, over Aaron Burr, who Hamilton had a long and bitter rivalry with. He convinced other Congressmen to do the same, leading to Jefferson becoming President and Burr Vice-President in 1800. After it was clear Jefferson was not going to support Burr being Vice-President in the 1804 election, Burr decided to run as governor of New York. Burr was defeated by forces that included Hamilton. These defeats along with a comment by Hamilton that Burr believed was an attack on his honor by Hamilton and Hamilton’s subsequent refusal to apologize, led to one of the most famous duels in American history. The duel began at dawn on July 11, 1804. Vice-President Burr shot Hamilton delivering a fatal wound. The paralyzed Hamilton who knew he was mortally wounded, was brought to the home of his friend William Bayard Jr. After final visits from family and friends and considerable suffering, Alexander Hamilton died on July 12, 1804.

Hamilton Inspired Fiction: Will They Tell My Story?

Can't get enough of the musical? Love historical fiction? Then you may be interested in some of these novels based on some of the major players in Hamilton.

Hamilton's Founding Fathers: History Has Its Eyes on You

“Legacy. What is a legacy? It’s planting seeds in a garden you never get to see.” – Alexander Hamilton, "The World Was Wide Enough" Learn more about the men and women who inspired the Broadway musical Hamilton.