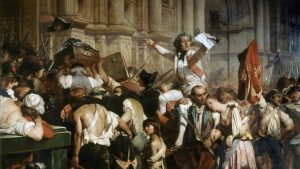 July 14th marks the annual celebration of Bastille Day, a national holiday in France. Bastille Day started when a mob of Frenchmen who were tired of the rule of the king of France stormed a prison to obtain weapons and free the prisoners. Bastille Day marked the start of the French Revolution and the end of the fall of the Bastille in Paris on July 14, 1789. Originally built as a medieval fortress, the Bastille, located on the east side of Paris, came to be used as a state prison. The Bastille was hated by most Frenchmen because it represented the oppressive monarchy of France and some of the inmates were those who disagreed with the king politically. The storming of the Bastille marked the beginning of the French Revolution in which the monarchy was overthrown and a republic was set up based on "Liberte, egalite, fraternite" or translated as liberty, equality, and brotherhood.

In France, it is customary for French people to greet each other on Bastille Day with "Joyeux Quatroze Julliet" as a way of saying Happy Bastille Day. Bastille Day, or known in France as Le Fete Nationale, is celebrated by a two-days celebration filled with free entertainment, a military parade, public dances at local fire stations, an outdoor opera concert, and plenty of fireworks that light up the sky. Foods are also an important part of the Bastille Day celebration with plenty of champagne, strawberries, chicken, cheese, escargot, pastries, tarts, and baguettes.