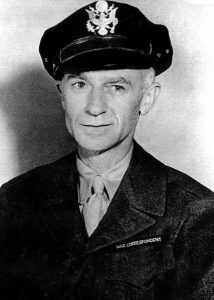 Commemorating the 75th anniversary of the end of World War II, this blog will focus on a famed wartime correspondent, Ernie Pyle, whose columns appeared, not only in the newspaper in which he was employed, but in several newspapers around the United States. He quickly gained popularity among readers, and became the managing editor of the Washington (D.C.) Daily News in 1932. Even as managing editor, Ernie Pyle's desire to travel and journal the "everyday" man led him to eventually become a traveling journalist, and he traveled the U.S. and other parts of the world. Before turning his attention to the War, Ernie Pyle's columns on common Americans were enjoyed by many readers who liked his uncanny ability to write about a person's experiences. Later, he visited several U.S. troops fighting in WWII to capture the emotions and the first-hand experiences of the soldiers and pen it. During World War II, Pyle wrote from what he called "the worm's eye view". His style of writing involved highlighting the emotions of the soldiers in an insightful way that allowed the readers to feel as if they were in the trenches. His approach to writing about the experiences and trials of the common man earned him the Pulitzer Prize for journalism in 1944.

Ernie was born in 1900 in Dana, Indiana to a tenant farmer and his wife. Pyle, shy and intelligent, was an only child, and none of his parents attended school beyond the eighth grade. Pyle disliked farming and after graduating, pursued his dream of leaving farming and enlisted in the U.S. Naval Reserve. Before he finished his training in the naval reserve, he enrolled at Indiana University and began his career path as a journalist. In July of 1925, Pyle married Geraldine Elizabeth "Jerry" Siebolds. The couple traveled to many parts of the country together, however, their marriage was tempestuous. Pyle was often ill, suffered from bouts of depression made worse by the stress of his work covering the war, and was a periodic abuser of alcohol. His wife, Jerry, also suffered from alcoholism and periods of mental illness (either depression or bipolar disorder).

His award-winning articles on World War II are in the Ernie Pyle World War II Museum in Dana, Indiana; the Ernie Pyle Public Library in Albuquerque, New Mexico; as well as other archives, academic libraries, and compilations of articles in books authored by Pyle. At the time of Pyle's death in 1945, he had already appeared in 400 daily and 300 weekly newspapers. In one of his articles, "Killing is All That Matters", Pyle compared the harsh conditions of the soldier on the front line to living in a comfortable home by stating "the last of the comforts are gone, From now on, you sleep in bedrolls under tents. You wash whenever and wherever you can. You carry your food on your back when you are fighting. You dig ditches for protection from bullets... There are no more hot water taps."  Further in the article, he wrote, "when our troops made their first landings in North Africa, they went four days without even blankets, just catching a few hours of sleep on the ground". Troops welcomed Pyle to tell their stories because of his uncanny ability and compassion to tell first-hand accounts of their experiences.

In March of 1945, Pyle sailed with the Allied invasion fleet bound for Okinawa. He stated, "we are firmly bound on Okinawa, which is like having your foot in the kitchen door". On April 17,1945, Pyle went ashore on the little island of le Shima off the coast of Okinawa. One morning as he was riding in a jeep with an army officer, a hidden Japanese gunner opened fire and, when Pyle raised his head after the jeep was driven into a ditch for protection, a bullet struck him just below the rim of his helmet ending his life. His legacy, however, will always be remembered by his columns on the "everyday, common" man and his columns on the World War II soldiers that he interviewed as he told their stories of fear, bewilderment, and the sights they experienced as they fought bravely, while trying to stay alive to see home again.

To read some of Ernie Pyle's engaging wartime columns, go to https://sites.mediaschool.indiana.edu/erniepyle/wartime-columns/

Ernie Pyle: The Voice of the American Soldier in World War II.