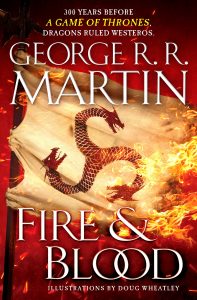 The Starks promised us that Winter is Coming. Since last year, it came and went. Game of Thrones has wrapped up and the world has moved on to other shows and fandoms. In the meanwhile, some fans may wonder what is G. R. R. Martin working on now? What else can one digest to consume the ravenous hunger for more of Westeros?

Look no further than Fire and Blood.

Be warned, slight SPOILERS may be below.

Fire and Blood is Martin's latest work set in the world of his popular fiction. Rather than being a sequel, however, this is instead a history book set several centuries before the start of the series.

The book is written in the style of an in-universe reference book. The book's author, Archmaester Gyldayn, was the resident scholar and maester of Summerhall, a summer palace maintained by the Targaryen kings of Westeros. Fans of the series might remember Summerhall as the place where Prince Rhaegar was born, and where his grandfather Aegon the Unlikely and Sir Dunk of the Kingsguard died while trying to hatch a clutch of dragon eggs. The book is a history of the Targaryen family, covering the life of Aegon the Conqueror and his sisters, and the various kings, queens, and wars that followed. Fire and Blood covers a span of about one hundred and fifty years and ends at roughly the halfway point of the dynasty, with the reign of Aegon III. 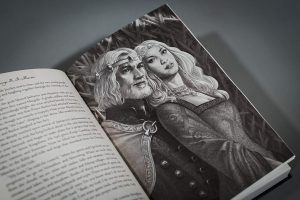 Some of the material provided in the book has already existed in one form or another. The Sons of the Dragon partition tells of the hopeful but terrible reigns under Aegon's sons Aenys and Maegor. The Rogue Prince covers the adventures of Daemon Targaryen, younger brother of Viserys I and onetime King of the Stepstones, renown for his combat ability and bravery. The Princess and the Queen, a contribution by Martin in the anthology Dangerous Women, opens a new window , relates the Targaryen civil war known famously as the Dance of Dragons. Martin, through Gyldayn, fills in the rest of  the book with a comprehensive history of the family and the major players involved in Westeros at the time.

If you are accustomed to reading history books, Fire and Blood is an absolute treat. Gyldayn lives and breathes as readily as Martin does, bestowing vivid life to text that seems ponderous and woe-begotten. Rather than being bored, fans can easily find themselves engrossed in the histories. Throughout, readers may even learn some interesting, though not necessarily game-changing, trivia that impacts Game of Thrones and A Song of Ice and Fire. By the end of the volume, one just wants more to devour with insatiable greed, and that is indicative of Martin's charismatic writing.

On the other hand, Fire and Blood is also a distraction from the main attraction fans really want: the next entry in A Song of Ice and Fire. Even if Martin already wrote half of it in other books, and even if he only spent a year or two editing and embellishing his work, that is time that could have been spent on what fans want most. As much as some readers, myself included, might like the historical style of Fire and Blood and tolerate the obviously biased view of the fictional writer, some readers will find the change of scenery glacially slow and the cast of characters a little two-dimensional compared to what is displayed in his other novels.

If you're a fan of Game of Thrones and A Song of Ice and Fire, and especially a fan of history, you owe it to yourself to read Fire and Blood. I encourage all fans to read this fine history, but its size, topic, and overall irrelevancy to Martin's other work may discourage some people. 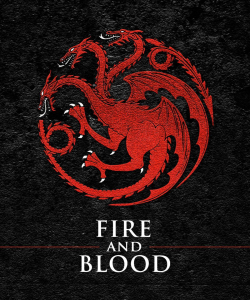 Enjoyed the blog? Feel free to check out our collection of blogs, opens a new window where myself and other contributors post about various topics popular and informative.

Looking for something else? The St. Tammany Parish Library is happy to offer use of our online catalog, opens a new window to help patrons with any searches they might wish to conduct.