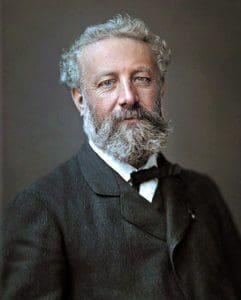 Jules Verne is one of the world's most famous authors. Depending on the year, he averages as the second most translated author in the world, sharing space with Agatha Christie and William Shakespeare. Mighty impressive! Verne is best known for his series of adventure novels, Les Voyages Extraordinaires. Les Voyages Extraordinaires includes several notable works, including Journey to the Center of the Earth, Around the World in 80 Days, 20,000 Leagues Under the Sea, and more!

Jules Verne arrived in this world in 1828, experiencing life at a tumultuous time in French history. Born in Nantes, Verne was the eldest born son of a lawyer, whose father hoped to have him inherit the family practice when he came of age. Unluckily for Monsieur Verne, Jules realized early on that his talents lay in writing, particularly theater and literature. The aspiring writer also possessed immense interest in the changing world around him, as France and the rest of the world began to experience rapid industrialization, wondrous new inventions, and the discoveries of exotic places never visited by Europeans. By 1848, Verne was living in Paris fulltime, met illustrious writers like Alexandre Dumas, and worked at the Theatre Lyrique. By 1863, Verne was ready to transition into the literature he loved and published his first novel, Five Weeks in a Balloon.

Beginning with his debut, Verne rose to popularity as an author of adventure novels. During his life, few scholars seriously considered his work worth attention, and many of his novels suffered from drastic abbreviation and alteration, sometimes to the point of changing entire characters and scenes. Today, Verne is a celebrated writer of the avant-garde style, with his future-looking premises and technologies and his adventurous spirit. Many inventors and explorers credit Verne for inspiring their accomplishments, including Robert Goddard, Werner von Braun, Edwin Hubble, Yuri Gagarin, and many more.

Feel free to check out some of his many works below. Happy reading!

Journey to the Center of the Earth

Around the World in 80 Days

Journey to the Center of the Earth

Around the World in 80 Days

Also feel free to check out the rest of the STPL Bloggers, opens a new window. We're always writing about what's happening in the library and various topics of interest. Feel free to comment too!