Nine miles northeast of Covington nestled in an area dotted with large pines, sprawling oaks, and acres of farmland is the community of Lee Road. Lee Road is a rural community with neighborly people who regularly socialize and gather for good, friendly conversations usually at local businesses or in church. According to Mrs. Alice Rogers in her book, “St. Tammany: A Brief History and Description", Lee Road was named, “for a man by the name of Lee who operated a ferry crossing the Bogue Chitto River.” Rogers, a long-time resident of Lee Road spoke of the community as a “farming community. Farmers would load wagons with their produce and travel to Covington to the Farmer’s Market. It was an all day trip there and back because they were in wagons.” Many years ago in 1937, a man named Atwood Barker sold twenty heads of cattle and used the money from the sale to build the first store in his community. By 1938, he moved his store further up the road and purchased seventy-five acres of land at the intersection of Hwy 40 and La Hwy 437. Barker’s store became known as Atwood Barker’s General Store. Barker realized the need for providing goods to the area’s residents and education for the children. Barker’s business sense was illustrious in that he would accept an acre of land or cattle for payment of goods. In the REA paper, Barker stated, “give me twenty heads of cattle, and I’ll never go broke”. Barker’s store experienced growth over the years due to his hard work and business sense. The Barkers were a hard working family with Atwood, his wife, and only daughter, Frances, running the business seven days a week, almost twenty-four hours a day. Atwood General Store sold groceries, gas, cattle feed, and most everything that the community needed. Rogers stated that Atwood would “get his stock from the Covington Grocery and Grain Co.” She further emphasized that the Covington Grocery and Grain Company was located where the current Covington courthouse is located. Atwood sold property around his store and other businesses began to pop-up to meet the needs of the growing community. In the 1960's, the central hub of Lee Road became known to residents as Barker’s Corner because it was started by Atwood Barker. Barker’s Corner is located at the intersection of La Hwy 437 and Hwy 40. 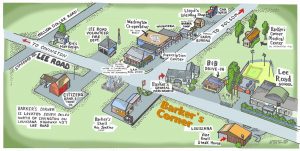 As a farming community, Lee Road residents would provide for their families by owning livestock to feed their families. In an interview with Rogers, she stated, “almost every household had their own milk cow or two to provide milk and butter and sometimes meat for the family. They all owned chickens for the eggs and for Sunday dinner, chicken and dumplings.” She also remembered the days when cows roamed free in the absence of stock laws. Stock laws were enforced in later years, and residents had to fence in their livestock. She also remembered the numerous dairy farms in the area, even in the 1950’s. She recounted that having a dairy farm was hard work and milking was done by hand. She stated that “cows had to be milked twice a day every day or they would quit producing milk.”

Community involvement, started with Atwood Barker, is important in the lives of Lee Road residents. Rogers stated in the 1940’s, Atwood Barker donated land to the school board to build a consolidated school with grades 1-9, but before that there were several schools in the area. The school was within walking distance from his store. As stated in the article, “Barker’s Corner, How It All Began”, children were allowed to “come place their mama’s grocery order at lunch so that items could be gathered and prepared for departure when they boarded the bus each afternoon.”

In 1976, following the tradition of her father in providing for the community, Frances Barker donated property next to Lee Road School for the building of a public library. After much controversy and debate over the erecting and funding of a public library, the dreams of Ms. Barker and interested residents were realized and work began on building the Lee Road Branch in December of 1986. The branch was opened on Monday, July 27, 1987. The Lee Road Branch Library provides library services and materials to area residents and to the local school, as well. 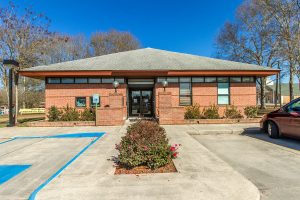 Besides Sunday morning church services, many of the residents go to church on Wednesday evenings. As Y. DiMaggio stated, “church night is Wednesday night. The family-owned businesses shut down on Wednesday evenings, except for the gas stations.” Rogers also stated, “church was important and there were several in the vicinity.” As she remembered past church services, she stated, “some (churches) only had visiting preachers and every family took turns feeding the preacher and his family.”

Lee Road is known for its restaurants with good Southern comfort food and hospitality. Some of the restaurants that draw residents and visitors to its doors are: Rick’s Catfish House and Lil Tasta Cajun Restaurant. Other businesses in Lee Road that provide residents with goods are Dawsey’s Hardware, Ellen’s Snowballs, Service Meats, Midpoint Feed, Citizen’s Bank and Trust, Lee Road Pharmacy, Todd’s Country Corner, Maximum Storage, Wayne’s Comberrel Services, Accounting & Notary, along with gas stations, day care facilities and other chain discount stores. The old white wooden building that was Atwood Barker General Store may no longer exist in this thriving center, but will forever be remembered by residents.. 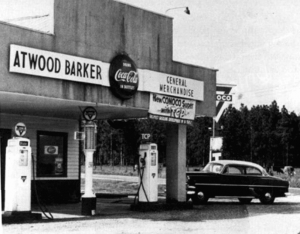 One of the best quotes from one of Lee Road’s own comes from Ms. Francis Barker, “money buys material things, but time makes memories.” The memories of Lee Road and changes in the economy and increased population are expressed by its residents. Recently, Fox 8 News did an interview with one of St. Tammany’s oldest residents, Mr. Philip Sharp, who is just shy of making his 110th birthday. Fox 8’s Nancy Parker had a chance to ride with Mr. Sharp as he drove her in his pickup truck to one of his regular dining places, Lil Tasta Cajun Restaurant in Lee Road, while reminiscing on changes and growth to the community. This remarkable story, “Easy Rider: 109-year-old Covington man still on the go” can be found at: https://www.fox8live.com/video/2019/07/09/easy-rider-year-old-covington-man-still-go/, opens a new window.

Atwood Barker’s business sense is still felt in the community of Lee Road. In the article, “Barker’s Corner”, three teenage boys had a pickup truck loaded down with watermelons for sale. The author stated that they could hear the spirit of Barker stating, “Give’em a truck load of melons, and they’ll never go broke.” 