In 1875, Slidell was known as the industrial capital of the South. Schooners carried building materials from Slidell ports to the New Orleans area. Timber and cattle provided income for many Slidell families. In 1881, an early inland settlement began at Robert’s Landing on the banks of Bayou Bonfouca. Early commerce began with the import and export of lumber, cattle and wild game. Robert’s Landing was also the headquarters for the railroad work crews. In 1882, a creosote plant was located on Bayou Vincent for treating lumber. The increase of industry in Slidell resulted in the need for housing, food and clothing for its residents. Many hotels and boarding houses were built, along with mercantile stores that sold food, clothing and other essentials for the people residing in Slidell. Sawmills were prevalent. The first telegraph line was installed connecting the north shore station to New Orleans and Meridian, Mississippi. Railroad engineers, Bouscaren and Fremaux laid out the townsite. In 1883, the first passenger train made its stop in Slidell. A wooden passenger depot was constructed on the west side of the tracks between Main Street and Pennsylvania Street. 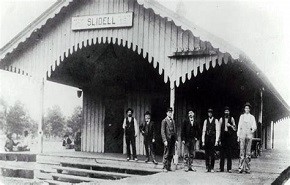 In 1888, the Town of Slidell was incorporated. Fritz Salmen, a native of Switzerland, realized the potential of Slidell as an industrious prospect and established his brick plant and a sawmill that was notably one of the largest industries in Slidell. In 1890, Fritz Salmen’s company, The Salmen Brick Company was one of the largest manufacturers of clay products in the South. 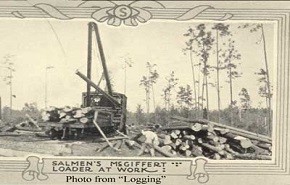 In 1910, the Salmen Company employed a total of 800 people. The Salmen’s general store had twenty clerks. The “Commissary”, as it was called, located at Front Street and Cleveland Avenue was the largest merchandise store in St. Tammany Parish. 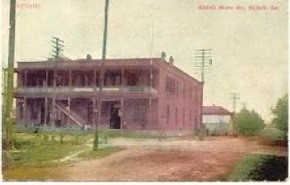 Salmen Town was developed with the increase of commerce resulting from Salmen’s industries.  Because of the booming economy, the need for religion, social gatherings and education was realized by the ladies of Slidell. The Ladies Aid Societies and Missionary Societies had fundraising events to raise funds for the building of churches and schools in the area. Brickmaking, lumber mills, shipbuilding and service commerce were the main forces of Slidell’s economy until 1930. 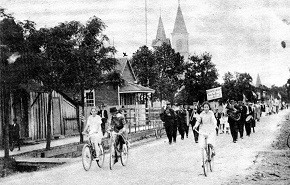 The output of tar, turpentine, rosin and charcoal provided employment to hundreds of men and kept fifty to sixty schooners busy by the daily arrivals and departures of vessels to and from the Old and New Basins at New Orleans. Today, Slidell is still an industrious city with many businesses attracting residents, as well as visitors to the community.