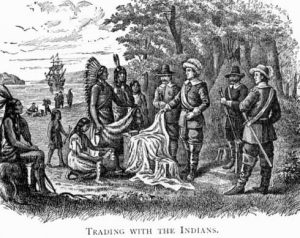 1. The Spaniards' arrival in North America in the 1500s brought these to the Indian tribes.  k. horses
2. A dwelling in the shape of a cone   a. tepee
3. The daughter of Chief Powhatan who saved the founder of Jamestown Colony from death.  l. Pocahontas
4. A dwelling associated with the Iroquois tribe.  o. longhouse
5. Who was known as the "Bird Woman".  m. Sacagawea
6. Important animal of the Plains Indians.   e. buffalo
7. A Northwestern tribal ceremony where great amounts of goods are given out.   h. Potlatch
8. The tribe that befriended the Pilgrims when they landed at Plymouth Rock.  f. Wampanoag
9. This tribe was used during World War II to transmit secret messages in their language.  b. Navajo
10. This tribe was undefeated in all of their battles with the U.S. government.  i. Seminoles
11. The name of the Five-Nation confederacy in the Northwest.  g. Iroquois
12. Which tribe did not live on the Great Plains.  n. Hopi
13. The name of the famous medicine man for the Sioux tribe.  c. Sitting Bull
14. A ceremony performed by many of the Indigenous peoples of the Great Plains.  d. Sun Dance
15. According to some archaeologists, the first people came to America from this continent.  j. Asia