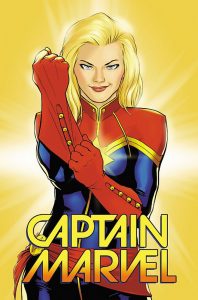 Captain Marvel isn't merely the Marvel Cinematic Universe's latest stand-alone film (barring the delayed release of Black Widow), but it is also the most recently produced by all accounts. Many of the previously discussed superheroes have been in films dating back to the 80's, 70's, and sometimes even before that! Other times, companies have taken their time trying to produce a film, sometimes attaching multiple directors, producers, and film companies to it, before the film finally sees the light of day. None of this is true for Captain Marvel.

The Captain Marvel film follows the exploits of Carol Danvers, the original Ms. Marvel and the seventh hero to be known as Captain Marvel, following the retirement of various temporary heroes, and the death of the original Captain, Mar-Vell. Like most of the Marvel Cinematic Universe, the film has its own take on Carol Danvers' origin story, although there are references to other iterations of the character.

Production of the film began as early as 2013, when Captain Marvel was one of two potential movies featuring a female lead (the other being Black Widow, which did not get greenlit until later), although even then the studio had not quite decided whether to highlight the original Mar-Vell or Carol Danvers. Marvel officially announced the project in 2014, and the writing team of Nicole Perlman and Meg LeFauve decided to loosely base the story on the fictional Free-Skrull War, dating back to the 1970s in Marvel Comics. Marvel eventually hired Anna Boden and Ryan Fleck as directors to oversee the project. For the lead, shortly after announcing the film, Marvel found their star in Brie Larson, pairing her alongside Marvel veteran Samuel L. Jackson as a significantly younger Nick Fury. 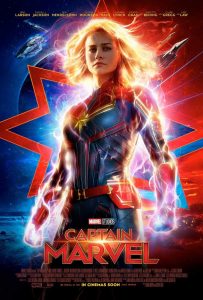 As mentioned above, the film stars Brie Larson in the title role. The film starts in 1970s and 80s America, with Carol Danvers as a young, rebellious woman with something to prove, and more than capable of doing such. Eventually she serves in the Air Force alongside her best friend Maria Rambeau (Lashana Lynch), during which time she serves as a test pilot. An accident occurs, winding with the death of Carol's mentor and her imbuement of incredible powers, before she is briskly kidnapped and brainwashed by aliens.

She eventually finds her way back to Earth, circa mid-1990's, and fans are treated to a new take on the period piece, featuring such nostalgia as Blockbusters Video, boomboxes, and pre-internet communications. Samuel L. Jackson plays his younger self, alongside Clark Gregg as Agent Coulson, both de-aged through cinema magic. Jackson in particularly is impressive, looking more like his roles in Jurassic Park and Die Hard With a Vengeance. Carol eventually finds out about the mysterious accident, her own origins, and just how strong she really is, before serving as the inspiration for the Avengers.

Captain Marvel proved to be an impressive film by any measure. The film grossed over $1.1 billion overall, including over $700 in the US and Canada. Critics praised the acting, action, and special effects, favorably comparing the piece to other films at the time such as Wonder Woman. Needless to say, Captain Marvel's legacy was firmly engraved.

Carol Danver's first official tease in the Marvel Cinematic Universe actually predates her standalone film; released several months prior, a post-credits scene featuring Nick Fury showcases a discreet beeper used to contact Carol. Said device is found by the Avengers in the aftermath of Avengers: Infinity War, and a further post-credit scene after Captain Marvel shows Carol's response to the beeper, and her official inclusion with the rest of the Marvel cast. Her next proper film, and latest so far, is Avengers: Endgame, during which she assists with the initial recovery after the previous film, as well as assisting in the final confrontation with Thanos.

Captain Marvel is going to be busy in Phase Four of the Marvel Cinematic Universe. In 2019, the company began development of a sequel movie, with Larson pegged to reprise her role of Carol Danvers. In 2020, Marvel announced The Marvels, starring Larson and joined by Teyonah Paris as a now-adult Monica Rambeau and Iman Vellani as Kamala Khan, the new Ms. Marvel. Teyonah guest-starred as Monica in the recent Disney+ series WandaVision, grown up since the events of Captain Marvel and now an agent of S.W.O.R.D., an upcoming competitor of S.H.I.E.L.D. Vellani is set to star in a Ms. Marvel series in Fall 2021, to serve as a prologue to the upcoming film.

Stay tuned for our next feature, on Black Widow and Hawkeye.

Also feel free to take a look at our collection of Online Blogs, opens a new window. The STPL Bloggers are always writing interesting articles about popular culture, history, and upcoming events of note. Feel free to check us out and keep in touch!