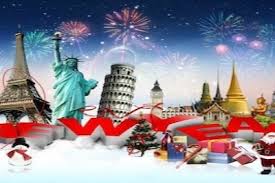 The earliest recorded New Year's festival started around 4,000 years ago in ancient Babylon. History.com discussed the beginning of the Babylonian New Year's tradition: "For the Babylonians, the first new moon following the vernal equinox-the day in late March with an equal amount of sunlight and darkness was the beginning of the new year.They had a massive festival, Akitu, that involved rituals on each of its eleven days". After the Babylonian tradition, other earlier civilizations started their traditions around the first day of the year to an agricultural or astronomical event. The flooding of the Nile in Egypt that occurs with the rising star of Sirius marked the beginning of their new year. In China, the second new moon after the winter solstice marks the first day of the Chinese New Year. As part of the Roman transformation of the calendar, Julius Caesar is credited with instituting the Julian calendar that closely resembles the Gregorian calendar that many countries have adopted. Caesar marked January 1 as the first day of the year mostly in honor of Janus, the Roman god of beginnings whose two faces allowed him to look forward into the future and back into the past. In medieval Europe, Christians replaced January 1 with religious holidays until 1582 when Pope Gregory XIII reestablished January 1 as New Year's Day. Now, let's explore how some countries of the world celebrate the coming of the new year with customs and traditions.

In Scotland, Hogmanay, a New Year's Eve celebration, is practiced by the first person crossing the threshold of a home in the New Year. This person should carry a gift for luck. Bonfire ceremonies are also held where the Scots parade, while swinging giant fireballs on poles, symbolizing the sun, to purify the New Year.

Because pigs represent progress and prosperity in some cultures, pork appears on tables in Cuba, Austria, Hungary, Portugal, and other countries. Ring-shaped cakes and ring-shaped pastries appear on tables in the Netherlands symbolizing the year has made a full circle. In Sweden and Norway, rice pudding with a hidden almond is served on New Year's Eve. The person who finds the almond is expected to have 12 months of good fortune.

If you travel to Greece on New Year's Day, you will find an onion hanging from the front door of homes as a symbol of rebirth. Parents also tap their children on the head with an onion to wake them on New Year's Day.

In some towns of Italy, passersby must watch out while walking by windows since people throw out old sofas, chairs, and refrigerators out of their windows on New Year's Eve.

People in Colombia carry around empty suitcases around the block in hopes of a travel-filled year ahead.

Old plates and glasses are thrown at doors of family and friends in Denmark to banish bad spirits. People of Denmark also have the custom of standing on chairs and jumping off them together in order to "leap" into January in hopes of good luck.

Casting molten tin into water and interpreting the shape the metal takes is a common practice in Finland, Germany, and Austria for New Year's Day. A heart or ring means a wedding will take place, while a ship means travel. The shape of a pig means plenty of food in the coming year.

In Brazil and Mexico, it is customary to wear colorful undies to influence what type of year you will have. Yellow brings prosperity and success, red brings love and romance, white brings peace and harmony, while green ensures health and well-being.

While walking around in the Philippines on New Year's Eve, you'll see round shapes that represent coins to symbolize prosperity in the coming year. Many Filipino families display piles of fruits on their tables and eat exactly 12 round fruits (mostly grapes) at midnight. Wearing polka dot clothing is also considered to bring good luck.

In Japan, the money tree, pine and cypress branches, is placed in a vase and decorated with old coins and paper flowers, and put at the foot of children's beds. This is called "cash to pass the year". The money is not to be spent, but saved.

To drive off evil spirits for a fresh New Year's start, people in Panama burn effigies (munecos) of well-known television and political figures. The effigies represent the old year.

In many cultures, people jump into a sea or local body of water as a means of cleansing and wiping the slate clean in preparation for the new year. No matter what the tradition or belief about the New Year, all are meant to bring  prosperity, wealth, luck, and good health for the coming year.

WorldStrides. 9 New Year's Traditions From Cultures Around the World., opens a new window