Note: This discussion is for informational purposes only and is not intended to serve as or replace advice, information, or treatment from health care professionals. 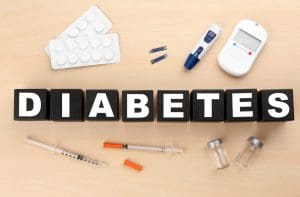 November is American Diabetes Month, opens a new window, a time to focus our attention on diabetes and how to identify it, treat it, and live well with it.

Diabetes is a chronic disease characterized by abnormally high levels of sugar (glucose) in the blood. During digestion, the body breaks down the carbohydrates in foods into glucose, a form of sugar that enters the bloodstream and provides a source of energy for the body. The pancreas makes a hormone called insulin, which is released into the blood in order to transfer the glucose to cells. In diabetes, however, this process is disrupted. Either the pancreas does not make and release insulin, or cells become resistant to insulin. In both cases, rather than being transported to cells throughout the body, glucose builds up in the blood. While the exact causes of diabetes are unknown, it is likely that there are both genetic and environmental factors that lead to its development. There is no cure for diabetes. The CDC estimates, opens a new window that 10.5% of Americans had diabetes in 2018.

Most cases of diabetes fall into one of three categories:

Type 1 diabetes, opens a new window is an autoimmune disease in which the immune system gradually destroys virtually all of the pancreatic cells that make insulin. Because people with type 1 diabetes cannot produce insulin naturally, they must take insulin daily in order to stay alive. Type 1 accounts for roughly 5 to 10% of diabetes cases and is likely to emerge before or during early adulthood.

Type 2 diabetes, opens a new window is a condition with two drivers of dysfunction. The pancreas does not produce enough insulin, and the body’s cells do not respond sufficiently to the insulin that is present. People with type 2 diabetes manage the disease with diet, exercise, and sometimes medications or insulin therapy. Type 2 accounts for roughly 90 to 95% of diabetes cases. Historically, type 2 diabetes has been diagnosed in middle adulthood or later; however, it is less uncommon in younger people as well now.

As the CDC explains, opens a new window, having a close relative (parent or sibling) with type 1 diabetes is a risk factor for developing type 1. Additionally, it is more likely to occur in particular age groups (children, teens, and young adults) as well as among white people compared to African Americans and Hispanic/Latino Americans.

People with the following characteristics are at risk for type 2 diabetes:

As noted, opens a new window by the National Institute of Diabetes and Digestive and Kidney Diseases (NIDDK), there are several common symptoms of diabetes. They include:

Physicians can perform a number of tests to determine whether someone has diabetes.

There are abundant resources for people who have diabetes as well as for their loved ones and caregivers. Below is a list of many of the resources available at the St. Tammany Parish Library. The list also includes web links to organizations that provide helpful information and support. Contact a reference librarian if you need help accessing any of these resources.

Please Note: In order to bring you new and interesting titles, Hoopla content is updated monthly, and these titles may not be available in the future. To find the latest titles, please visit www.hoopladigital.com, opens a new window.

St. Tammany Parish Library has lots of diabetes resources for patrons of all ages. Take a look at the list below to see just some of what's available!