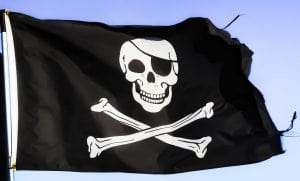 The mythology of piracy and pirates from the 1600s-1700s has lived on throughout our culture. Whether you’ve read Robert Louis Stevenson’s famous novel Treasure Island or J.M. Barrie’s Peter Pan, have listened to or seen the comedic opera The Pirates of Penzance, or have read or watched pirates in other media, including the hit anime/manga series One Piece, the Pirates of the Caribbean movies from Disney, or the television series Black Sails, chances are you have seen pirates make appearances in pop culture. These portrayals depict a daring, romanticized image of pirates which is ingrained in our society to the point where people observe a satirical holiday, Talk Like a Pirate Day, on September 19 each year.

Numerous pirates and privateers have made their mark throughout history, with many of them popularized in fictional works seen in pop culture. From famous Caribbean pirate Edward Teach, also known as Blackbeard, to Scottish pirate Captain Kidd, to the Battle of New Orleans hero Jean Lafitte, pirates and privateers have made their mark on American, world, and naval history. Some were commissioned by various countries to attack their enemies. Even during the American Revolution, the Continental Congress authorized privateers to attack enemy vessels. However, many pirates' lives and careers differed from the way the movies and books portray them. Historians have worked through the surviving documents that would show the real story of what these men and women were like on the seas. Many were real terrors on the sea, with their careers brutal but short before their enemies or the navies of the world caught up to them. Even the notorious Blackbeard only had a short career of a couple years in piracy before his death.

For more information on pirates and how they actually lived and made their mark on history, the truth behind the legends and mythology, have a look at the following books and ebooks.

Check these books out for a look at the real lives of pirates and privateers during the fabled "Golden Age of Piracy" that inspired much of the presence of pirates in popular culture, featuring biographies of the most notorious pirates of the era and how they operated during their reign on the seas. Also included are conflicts with pirates in later years.