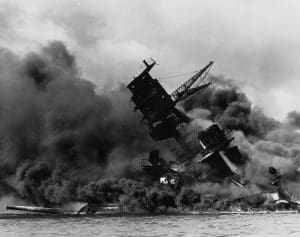 Eighty years ago, December 7, 1941, “a date which will live in infamy,” according to President Franklin Roosevelt, was the date of the attack on Pearl Harbor. At the time, World War II was raging through Europe and Asia, with the Allied forces fighting the powers of Germany, Italy, and Japan. During this stage of the conflict, many Americans, weary from the United States involvement in World War I, supported the isolationist movement where the U.S. would stay out of external conflicts. Congress even passed a series of Neutrality Acts in the 1930s, prohibiting U.S. ships and citizens from becoming directly involved in external conflicts. At best, the United States sent aid to Allied forces by providing supplies like tanks trucks, airplanes, ammunition, and food, allowed through the Lend Lease Act of 1941, but stopped short of direct intervention in the war. Meanwhile, tensions between the United States and Japan were growing with the Japanese military movement in the Pacific islands, threatening the Philippines, still a U.S. territory at the time of the war. Even so, the United States Congress and citizens did not want to enter the foreign conflict. However, that all changed on December 7, 1941.

On that day, Japanese forces sent their bombers to attack the naval base in Pearl Harbor in Hawaii, targeting the aircraft carriers and naval power stationed at the naval base. The results were devastating, with thousands killed, many ships damaged, with three completely destroyed, including the USS Arizona, the best-known ship sunk in the Pearl Harbor raid. The attack shocked American citizens, resulting in many dropping the isolationist view and supporting going to war.

The next day, President Roosevelt went before Congress and delivered what is now known as his Day of Infamy speech to ask for support on submitting a declaration of war on Japan in response to the attack on Pearl Harbor. Within an hour of President Roosevelt's speech, Congress passed the declaration of war on Japan almost unanimously, with one vote against the declaration. Even though the United States had previously encountered skirmishes with the German U-boats attacking their vessels in European waters, it was the attack on Pearl Harbor that officially brought the United States into World War II. Even after the war, we remember the attack on Pearl Harbor as a pivotal moment in American history. The National Park Service features events and programs about the attack at the Pearl Harbor National Memorial, opens a new window located in Honolulu. The National World War II Museum, opens a new window in New Orleans features the events of Pearl Harbor as part of their exhibits and even features special programs and displays to commemorate the 80th anniversary of the event.

Historians have looked over the records surrounding the attack on Pearl Harbor, revealing the tensions between the United States and Japan before the attack, including the U.S. oil embargo on Japan, which was one motivator for the Japanese attack. Also uncovered were signs of a warning that Pearl Harbor would be under attack; however, the warnings never made it to the military commanders in Pearl Harbor, leaving the military stationed there unprepared for the attack. Also revealed were the intended targets for the attack. Fortunately for the United States, the main targets in the attack, the aircraft carriers, were not docked at Pearl Harbor on the day of the attack. The oil industry targets in the region were also spared. These factors allowed the United States Navy to rebuild their forces and turn the tide of war against Japan through the war in the Pacific, including battles like the Battle of Midway, the Guadalcanal campaign, and the Battle of Iwo Jima to name a few.

Check out these sources to learn more about the events leading to, the day of, and the aftermath of the attack and review historical analyses and testimony from the survivors.

Check these sources out for more information about the infamous attack on Pearl Harbor on December 7, 1941 and the aftermath resulting in the United States entering World War II.