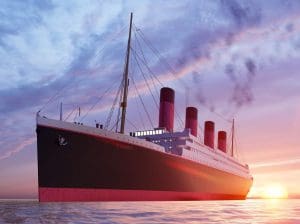 On April 15, 1912, 110 years ago, the British ocean liner known as the Titanic sank in the icy waters of the north Atlantic. More than 1500 passengers and crew perished in the disaster, including many wealthy and famous passengers. It was the ship’s maiden voyage, its first voyage with passengers. While the Titanic was not the first or last famous ship to sink during its maiden voyage, this disaster has captured the interest of the public, lingering in the minds of the people even today. The disaster of the Titanic provided the basis for many stories, including several films, most notably the 1958 film A Night to Remember, opens a new window, adapted from the famous book, opens a new window by Walter Lord, and James Cameron’s blockbuster film The Titanic, opens a new window. 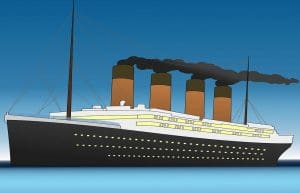 At the time, the Titanic was one of the largest ships designed to carry passengers overseas. The ship designers built the ship with the intent to hold a large number of people and cross the Atlantic at a quick pace. The designers were confident in the design of the ship, which included several watertight compartments to contain water if the hull was ever breached. Even if a couple of the watertight compartments took on water, the ship would still be buoyant enough to continue sailing. This design led many to believe that the Titanic was unsinkable. On its maiden voyage departing from Southampton, England to New York City, everyone on board would soon find out that this confidence was severely misplaced.

On April 14, 1912, late at night, the Titanic was sailing in the northern Atlantic waters when it came across an ice field. Due to the lack of light with no starlight or moonlight to light up the water and the unusually calm sea, the icebergs were difficult to spot. That proved catastrophic, as at 11:40 PM, the Titanic collided with an iceberg, rupturing five of the watertight compartments in the hull. As such, the Titanic starting taking on water, enough to rise over the vertical walls, called bulkheads, that lined the watertight compartments, allowing water to spill into the other watertight compartments. Such damage compromised the buoyancy of the liner and cause it to start sinking bow (front) first. The ship would continue tilting as the bow filled with water, lifting the stern (back) out of the water. This continued over the next couple hours, into the early hours of the next day before the stress of the weight and position of the ship caused the midsection to break, splitting the ship in two, before both pieces plummeted to the ocean floor.

With the sinking of the Titanic came a catastrophic loss of life. The Titanic only had 20 lifeboats, enough to fit only about half of the passengers and crew. While the number of lifeboats passed the laws of the day, the lack of lifeboat support for all passengers and crew meant in such an emergency it would be impossible to save everyone. To make matters worse, the crew was unaware of the full number of people each lifeboat could support, fearing that fully loading the lifeboats would compromise their buoyancy. One lifeboat was lowered into the sea with only 27 people, far from the 65 that it could safely carry. The tilting of the ship also made it difficult to load the lifeboats. In addition, the nighttime evacuation also disoriented passengers and crew, further complicating evacuations. The freezing waters also compromised survivors' abilities to survive in the water for long before entering cardiac arrest from the freezing temperatures, losing the ability to stay afloat. Over an hour after the Titanic's final plunge, another passenger ship, the Carpathia, arrived on the scene and rescued the survivors in the lifeboats. In the end, only 705 people would survive, with the remaining passengers and crew to perish in the freezing waters of the north Atlantic.

Historians have debated the events that led to the sinking of the Titanic. One theory claims that Captain Edward J. Smith was aiming to set a speed record and thus kept the ship moving at top speed despite warnings of the icy waters from other ships. Others state that the most crucial warnings never made it to the captain due to the radio operators, hired by the Marconi Company and not the ship’s crew, focusing on sending passenger telegrams and ignoring the ice warnings from other nearby ships, leaving the crew unaware of the real danger present until it was too late. Some even claim that a head-on collision with the iceberg rather than the ship scraping alongside the iceberg might have let the Titanic survive. There is even debate about the final song the ship musicians performed as the passengers hurried to the lifeboats, with some claiming their final song was either Autumn or Nearer My God to Thee. The debates and studies surrounding this historic disaster continue to this day.

To find out more about the sinking of the Titanic and the ship itself, check out the following sources:

Check out these sources for information about the Titanic, the cruise liner that sank after sustaining damage from an iceberg collision, killing more than 1500 passengers and crew in the process.