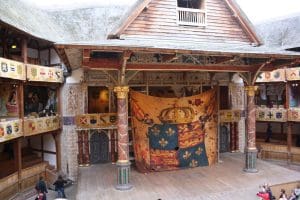 William Shakespeare is a name most people recognize despite being born on April 23, 1564 and dying at the age of fifty-two on April 23, 1616. During his lifetime he and his performance troop, Lord Chamberlain's Men, named after their lawful protector, and later the troop called the King's Men, during the reign of King James, would entertain Queen Elizabeth in the Palace halls of the Court where she was safeguarded so that Shakespeare could bring the world to her on a stage. Kept in archives there is a printed copy of his play The Merry Wives of Windsor from 1602 on which it's title page tells of the Queen's attendance :

"As it has been Divers times acted by the right Honorable my Lord Chamberlain's servants both before her Majestie and elsewhere..."

The elsewhere here referring to the audiences other than the ones held at Court and Palace Halls , of the motley crews in the playhouses of London, most notably the Globe Theatre.  Shakespeare, who was a part owner of the Globe, had helped build the theatre by relocating an old theatre building that was across the river to new property on the south banks of the Thames. The old theater structure was taken apart timber by timber and rebuilt on property that was affordable to the owners of the Globe whom split the profits amongst them.  The performance troop no longer had to fuss and lose wages by having audiences skip out of payment on the streets as they had suffered under the traveling shows.  Within the doors of the Globe storytellers and actors would satisfy a listener's ear in a time when the populace was illiterate. The audiences they served would pay for admittance and walk through the entrance which read:

Seven years after his death his plays and works began to be collected by some of the actors in the King's Men and were published in a collection titled Mr. William Shakespeare's Comedies, Histories, and Tragedies . Shakespeare's interplay of human nature by craft of his characters, stage, conflict, timing and other elements deliver a script much relatable to audiences worldwide today and after Shakespeare's death in 1616 his works are kept alive today in playhouses, theatres, and films world wide.

IMHO the retelling of his work Romeo and Juliet directed in 1969 by Franco Zeffirelli, who doesn't take many liberties with the script by keeping the early English language true to it's written form for the film is truly a beautiful film. The director mimics the 'spaghetti westerns' being shot in that time so use of outdoor filming on site in the Tuscany region of Italy and natural lighting set the film rather than a Hollywood studio. The film recreates the tragic play written in the 1590s of the star-crossed lovers as it's opening scene portrays  Act 1: Scene 1 on the streets of Verona where begins a deadly street fight  amongst the Montague and Capulet houses whom are causing civil disorder throughout the city . Shakespeare sets the stage for the ill fated lovers amongst the conflicts of their neighboring world in one of the greatest tragedy's ever staged.

Shakespeare must of been a lover and was certainly a genius of words using them to best craft his character's and plots in a sort of wordplay he was controlling. A study done found that roughly 20,000 words were used in his plays and poems. Supposedly, he created nearly 1,700 words or perhaps some of these words were part of  the everyday colloquialisms spoken on the streets of his time, or a little of both,  but either way his use of words hit the mark. Here are a few well known quotes he either put to writing or created of his own and I'm sure you can add on with ease.

"All that glitters is not gold" (The Merchant of Venice)

"Neither rhyme nor reason" (Comedy of Errors)

"It's Greek to Me" (Julius Caesar)

The bard is so relatable to the human condition that while the English language has aged since his stories were written over 400 years ago , his works are still loved. The St. Tammany Parish Library has a collection of his works be they films, sonnets, poems, plays and/or ballets of the Bard 's works and they're here for you to pick one up.  So literally grab your Library Card and check out some Shakespeare that graces your shelves and/or your digital collection here at your library.

Much Ado About Nothing