This is part two of a two-part series on the 1918 influenza pandemic in St. Tammany Parish. Read part one here. 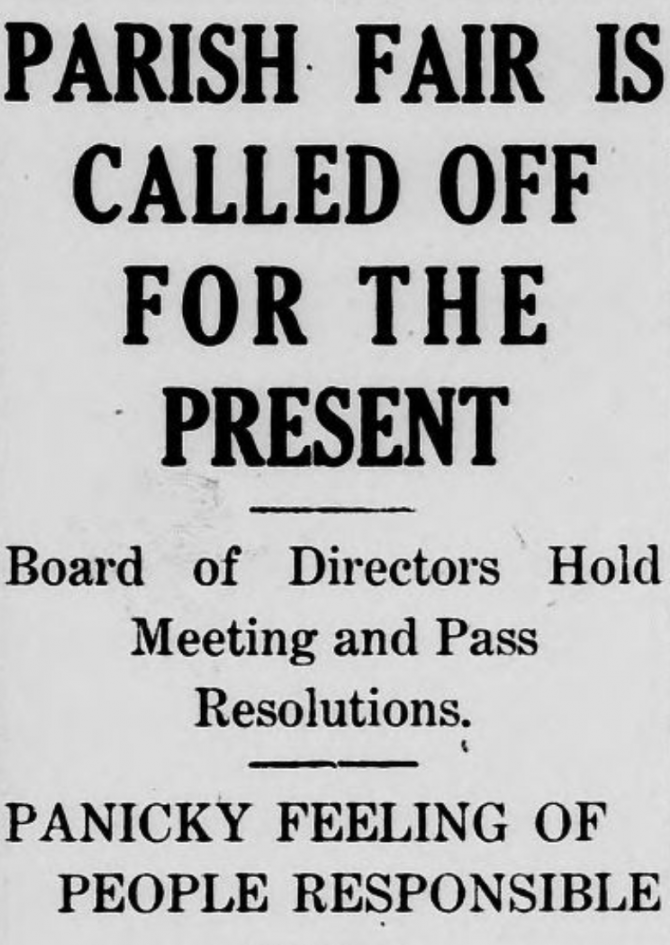 By November 23, 1918, the parish was down to only 27 cases of influenza. Slidell and Mandeville schools had reopened on November 18, with Covington schools reopening on November 25. To make up for lost time, the school day was extended by an hour, and Christmas break was cancelled. Still, the fact that influenza was a continuing presence in the community made many nervous. The district court, which had been closed since October, pushed back its re-opening until December. The St. Tammany Parish Fair, to have been held from November 28-December 1, was postponed for a second time, due to public concern that the gathering might lead to another jump in cases.

The Farmer was critical of what they viewed as an over-cautious reaction: "The best friend of the flu is the 'scared-to-death'...He is the cause of hasty and immature action. He helps to demoralize business. Should he get numerous enough, he would kill the holiday trade and make the should-be greatest Christmas a dismal failure." The Farmer encouraged residents to "COUGH AND SNEEZE IN YOUR HANDKERCHIEF AND THEN STERILIZE IT AND DON'T SPIT IN ANY ONE'S FACE WHEN YOU TALK TO HIM. With the observation of these rules you have done the best that can be done. THEN GO AHEAD AND ATTEND TO BUSINESS AS USUAL."

December must have been a long-overdue period of relaxation for the area, with many soldiers home for good, and peace to be grateful for. And yet the virus was still lurking in the community, about to cause another resurgence of cases. By mid-January 1919, it became clear that St. Tammany was not out of the woods just yet. The schools remained open, making many uncomfortable. One such concerned parent was Kate Abel, who wrote to the Farmer from Slidell on January 20. As she put it, for the schools to stay open amidst a new wave of the pandemic, it was as if the law of the land was "Let the teachers and children all die, so they die educated." She was choosing to keep her children at home, regardless of whether or not the schools closed: "Better a few months loss of school than to be left with weak lungs, palsied limbs and brains, if you escape with your life, from this horrible disease."

By January 25, Covington's Board of Health had again made the difficult decision to close public schools and all "places of amusement". This was a decision made

independently from Dr. Oscar Dowling, the President of the State Board of Health, who did not officially advocate a second closing order, in part because the first one was not widely followed; he did recommend, though, that public gatherings be suspended and that people stay at home. The St. Tammany Farmer was critical of the closures, citing the fact that the second wave seemed to be less virulent and less fatal, while acknowledging the potential of such an strong reaction to tamp down the virus for good.

The strict measures seem to have worked: by early February, the theaters had reopened. The long dormant social calendar revived as well. Doyle Stockfleth hosted a supper dance in Madisonville, on the basis of a boast that he could fry oysters better than anyone in town. A Valentine dance was held by the Knights of Columbus at the Southern Hotel. Featuring the "long pent up terpsichorian impulses of the dancing element," and the "dainty gowns of the ladies," it was considered "one of the 'classiest' little social stunts attempted in Covington for some time." The truest symbol of the end of the epidemic in St. Tammany, though, was the holding of Mardi Gras festivities in March, with a masquerade skate at the Casino skating rink and a masquerade ball at the Riverside Pavilion: "one big, happy, swaying, jazzing crowd."

In many ways St. Tammany was lucky, escaping the large casualties suffered in more crowded areas. Perhaps some of this had to do with the so-called "Ozone Belt", the clean air and pine trees of the parish. But certainly much of the credit for the parish's success should be given to the Board of Health, which acted quickly and decisively in order to halt the spread of the virus. Although their actions at the time appeared, to some, to be overreactions, they may have contributed to the comparatively low numbers of fatalities in St. Tammany.

As we go through our own pandemic season, we may take comfort in the fact that, a little over a century ago, our predecessors also wore masks, covered their coughs, stayed home from school and from places of fun. And, when the months had passed, and it was safe again - they gathered together to dance, talk, and enjoy each other's company once more.

All newsprint images and quotations from the St. Tammany Farmer, accessed through NewspaperArchive.

For more information on the 1918 influenza pandemic:

Center for Disease Control guide to the 1918 influenza pandemic
https://www.cdc.gov/flu/pandemic-resources/1918-pandemic-h1n1.html, opens a new window
The American Influenza Epidemic of 1918-1919: A Digital Encyclopedia
https://www.influenzaarchive.org/index.html, opens a new window
National Archives online exhibit, "The Deadly Virus: The Influenza Epidemic of 1918"
https://www.archives.gov/exhibits/influenza-epidemic/
We welcome your respectful and on-topic comments and questions in this limited public forum. To find out more, please see Appropriate Use When Posting Content. Community-contributed content represents the views of the user, not those of St. Tammany Parish Library