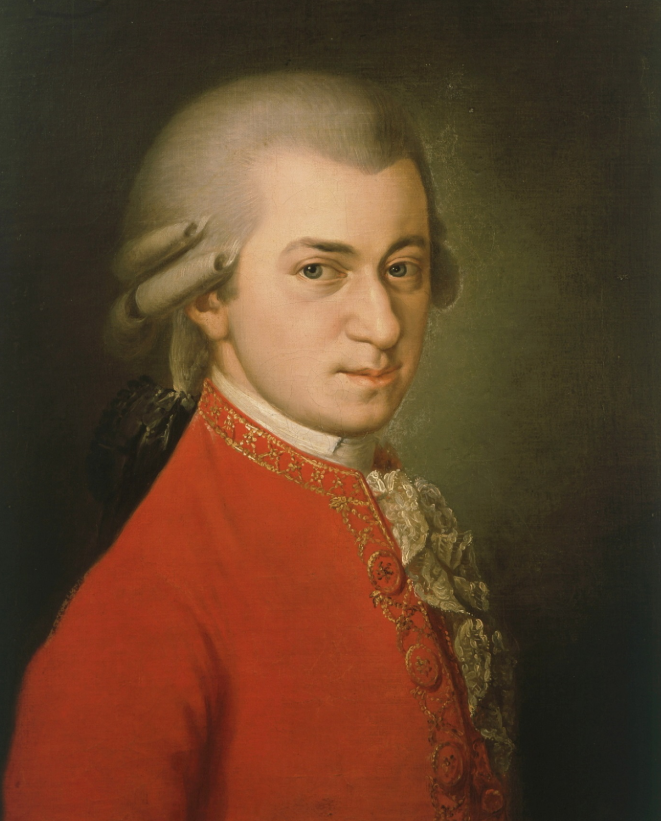 Wolfgang Amadeus Mozart was born January 27, 1756 in Salzburg, Austria, to Leopold Mozart and Anna Maria Pertl. He was the youngest of seven children, five of whom died in infancy. His older sister Maria Anna Mozart, was also a musician and she was an excellent harpsichord and fortepiano player. His father was a minor composer and an experienced teacher. When Maria Anna was 7, Leopold began teaching her keyboard lessons, while Mozart, 3, watched. When Mozart turned 4, his father began teaching him. By the time that Mozart was 5, he began composing little pieces that he would play for his father, while Leopold wrote them down.

Around 1762-1765 Mozart and his family began traveling Europe, where he and his sister, Maria Anna, would play as child prodigies. This tour ended up lasting for 3 1/2 years and introduced Mozart to many musicians and aquainted him with the works of other composers. One musician, Johann Christian Bach, was a particularly important influence for Mozart. Around this time, he also wrote his first symphony at 8 years old.

In 1773, Mozart was employed as a court musician by the ruler of Salzburg, Prince-Archbishop Hieronymus Colloredo. During his employment Mozart wrote five violin concertos, the only ones he would write. In addition, he wrote piano concerto K. 271, considered by critics to be a breakthrough work. In January 1781, Mozart's opera Idomeneo, premiered in Munich with considerable success. In August 1782, Mozart married Constanze Weber, after having a difficult time obtaining his father's permission. By the end of the 1780s , Mozart's finanical circumstances worsened. Around 1786 he began to appear less frequently at public concerts, causing his income to shrink. He began to borrow heavily from friends to keep his family afloat and it seems that his musical output slowed, leading many historians to believe that he suffered from depression during this period.

Mozart's last year, until his fatal illness, was a time of great productivity. He composed a great deal, including some of his most loved works like: the opera The Magic Flute, the piano concerto K. 595, the clarinet concerto K. 622, the last of his great string quintets K. 614, the motet ave verum corpus K. 618, and the unfinished requiem K. 626. Mozart fell ill while in Prague for the September 6, 1791 premiere of his opera La clemema di Tito. He continued his professional functions for sometime and even conducted the premiere of The Magic Flute on September 30, 1791. His health began to deteriorate and by November 20 he was bedridden. Wolfgang Amadeus Mozart died on December 5, 1791, at the age of 35. In the period after his death, there was an unprecedented wave of enthusiasm for his work, several biographies were written at this time, and publishers fought to produce complete editions of his works.