The extraordinary story of the founding of the Italian city of Rome is one of intrigue, 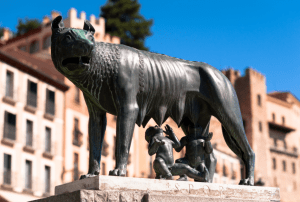 betrayal, and vindication. Romulus and Remus, opens a new window were descendants of Aeneas and were born into a royal family: The twins were born to Rhea Silvia, the daughter of Numitor, a king deposed by his own brother, and were fathered by Mars, the god of war. Numitor's traitorous brother Amulius, fearing the retribution he might face later from the twins, had them thrown into the Tiber River and left for dead. The infants survived the assassination attempt and drifted downriver, ending up on the riverbank where they were nursed by a she-wolf until a shepherd found and rescued them. Years later, the brothers, learning of their past, helped to overthrow and kill their uncle and restore Numitor to the throne. Romulus and Remus then set their sights on founding a city of their own and decided to do so at the site of their rescue all those years before. However, a fight ensued between the brothers, and Romulus killed Remus. Romulus went on alone to establish the city that was named for him: Rome, which tradition holds was founded officially on April 21, 753 BCE. Romulus was the first of seven kings to reign over Rome between 753 BCE and 509 BCE, when Rome became a Republic.

Or so the story goes.

Much of what is believed about the earliest years of Rome is imbued with myth and tradition; hard evidence, unfortunately, is lacking. Marcus Terentius Varro, opens a new window (116-27 BCE)--born several centuries after Rome came into being--is considered to be the most distinguished scholar of ancient Rome, but his extensive writings on the history of the city's origins, based in part on Latin and Greek literary tradition and relatively scant written records, are lost. Appian of Alexandria, opens a new window wrote an expansive history of Rome in the second century; however, only fragments of his writings on Rome's origins remain in existence. Original ancient Latin literature was recorded on papyrus, which degraded over the centuries. As such, much of that early literature was lost unless the copyists and scribes of the Middle Ages chose to copy it for preservation. Those scribes tended to focus on preserving and copying only those documents and artifacts that they found relevant, and unfortunately, many early Latin texts and documents did not make the cut (Woolf, 2003).

While we don't know conclusively many of the details about the earliest years of the Roman settlement, we do know that Rome, opens a new window likely started as a city-state inhabited by Latins, Indo-European groups who came to the Italian peninsula from north of the Alps by 1000 BCE; and that the rulers during the kingdom of Rome were probably Etruscans. Rome's kings were advised by an aristocratic senate. Following the expulsion of Tarquinius Superbus, opens a new window, the last king of Rome, in 509 BCE, the city-state became a Republic ruled mainly by two consuls (chosen from the wealthiest families and elected to lead for a year) and the senate (Mackay, 2003).

The Roman Republic was marked by both significant expansion and internal turmoil. The Romans battled and annexed other city-states, and by 270 BCE, opens a new window, they ruled almost the entirety of the Italian peninsula. Further conflicts ensued with factions outside of the peninsula that gave the Roman Republic control of areas almost all the way around the Mediterranean Sea. However, internal political unrest led to violence and civil war. Over time, the Republic fell victim to corrupting and self-serving alliances between the senators and the provincial governors and generals throughout the Republic. One such general, Julius Caesar, opens a new window, gradually gained power within the Republic. He held a number of influential positions, one of which was pontifex maximus, the chief high priest, in 63 BCE. He also gained enemies along the way and was assassinated on the Ides of March in 44 BCE. By the time of his death, he had become the dictator of Rome. Over the next 17 or so years, his heirs and his assassins struggled for power. Ultimately, his adopted son Caius Julius Caesar Octavianus (Octavian) prevailed, and he ruled as Augustus--the first emperor of the Roman Empire--from 27 BCE until his death in 14 CE. 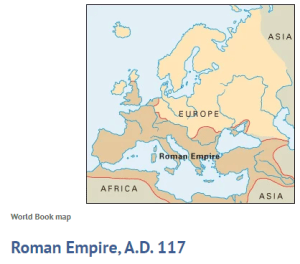 The Roman Empire continued to grow until it reached its peak in 117 CE (see map at right). In the late third century CE, under the rule of the emperor Diocletian, opens a new window, the once-unified Roman Empire was divided. Diocletian chose to rule as emperor of the Eastern Roman Empire, which included Asia and Egypt; Maximian was named emperor of the Western Roman Empire. A few years later, Diocletian instituted a tetrarchy, opens a new window by designating two Caesares (lieutenant-emperors) to rule alongside the two emperors. This division of power functioned for a while but ultimately collapsed, leaving Constantine the sole emperor in 323 CE. It was under Constantine that Christianity, opens a new window was officially recognized, helping to set the stage for its spread throughout the Roman Empire. The Western Roman Empire was vulnerable to barbarian invasions and met its demise in 476 CE, when Romulus Augustulus, its last emperor, was deposed by the barbarian Odoacer who was declared the king of Italy. The Eastern Roman (Byzantine) Empire, opens a new window continued until the middle of the 15th century, when its capital Constantinople fell to the Ottomans.

There is so much more to learn about the history of ancient Rome and its influence on the world through the centuries. The St. Tammany Parish Library has an abundance of resources on the topic. Click the links above to read more in our digital resources, or take a look at the list below for just some of the items on Rome in our collection!

Ancient Rome was, in its heyday, a sprawling empire and formidable world power. Many centuries later, we can still see its imprint on culture, government, and society. If you'd like to learn more about ancient Rome or read fictional works that take place there, the St. Tammany Parish Library has lots to offer! Take a look at just some of the items in our catalog that are available for checkout. Please Note: In order to bring you new and interesting titles, Hoopla content is updated monthly, and these titles may not be available in the future. To find the latest titles, please visit www.hoopladigital.com, opens a new window.