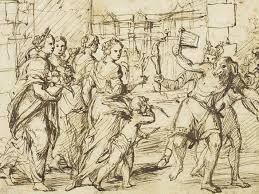 Valentine's Day, typically associated with flowers, chocolate candies, intimate dinners, and other displays of affection, started as a pagan holiday. The origin of Valentine's Day started with the Roman festival, Lupercalia, that was held in mid-February. Lupercalia was a pagan festival dedicated to Faunus, the roman god of agriculture, as well as the Roman founders, Romulus and Remus.The festival celebrated the coming of spring with fertility rites and the pairing of women with men by lottery. Roman priests would gather at the cave where Romulus and Remus were believed to be cared for by a she-wolf. The priests would sacrifice a goat for fertility and cut the goat's hide into strips dipped in sacrificial blood, then gently slap the Roman women and crops of the field with the bloodied strips to make them fertile in the coming year. The women would also place their names in a big urn in the city to be chosen by one of the city's single men to be paired for the year which often ended in marriage. Lupercalia survived the first rise of Christianity, but was outlawed and deemed "un-Christian" at the end of the fifth century.

During the 5th century, the pagan celebration, Lupercalia became St. Valentine's Day when Pope Gelasius I replaced the pagan festival with one associated with Christian virtues. According to Britannica, the Catholic Church recognized three saints in which Valentine's Day may have been named. One theory suggested Valentine was a priest who served during the third century in Rome. Emperor Claudius II decided that single men made better soldiers and outlawed marriages. This priest was said to have defied Claudius's decree and continued to perform secret marriages. Later, he was put to death by Claudius's soldiers for defying the decree. Another theory stated that Valentine was a bishop, St. Valentine of Terni, who was also beheaded by Claudius's soldiers outside of Rome. Other stories suggested that Valentine was killed for attempting to help Christians escape harsh Roman prisons. According to the legend, "an imprisoned Valentine actually sent the first “valentine” greeting himself after he fell in love with a young girl–possibly his jailor’s daughter–who visited him during his confinement. Before his death, it is alleged that he wrote her a letter signed “From your Valentine,” an expression that is still in use today."

Cupid is often portrayed on Valentine's Day with origins from the Roman god, Cupid, with roots in Greek mythology as the Greek god of love, Eros. According to Greek poets, Eros was a handsome immortal who played with the emotions of Gods and men by using golden arrows to incite love. He later appeared as a cherub on Valentine's Day.

Valentine's Day, typically observed on February 14th, is celebrated in the United States, Canada, Mexico, the United Kingdom, France, Australia and Great Britain. Americans began exchanging hand-made valentines in the early 1700's. According to the Greeting Card Association, approximately 145 million Valentine's Day cards are sent each year, which makes Valentine's Day the holiday with the second largest card production. Christmas came in first place for the number of cards sent to family and friends.