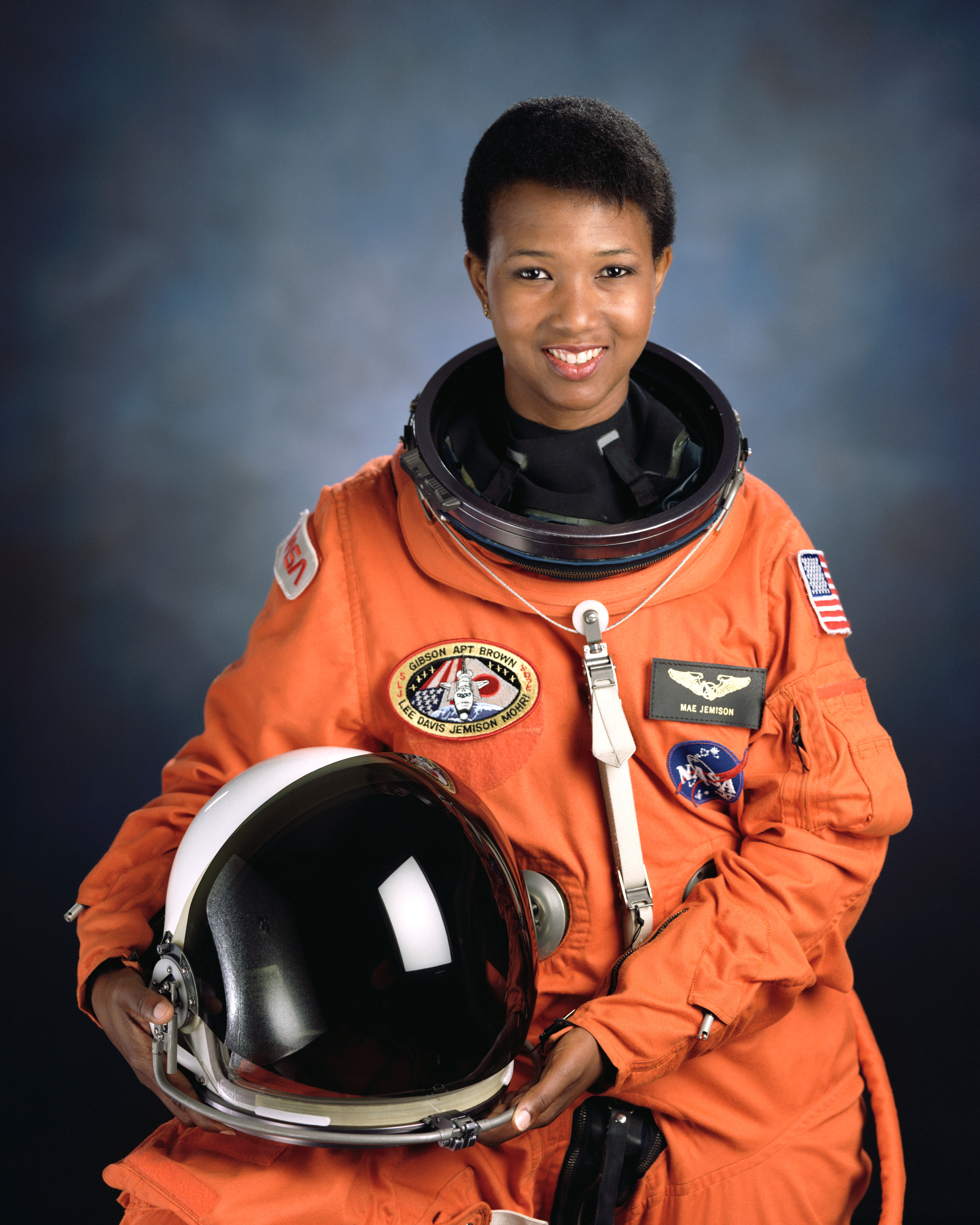 Dr. Mae Carol Jemison was born in Decatur, Alabama, on October 17, 1956, the youngest of three children of Charlie Jemison and Dorothy Jemison. The family moved to Chicago, when Jemison was three years old, to take advantage of the better educational and employment opportunities there. As a young girl growing up in Chicago she knew she wanted to go into space someday. The television show Star Trek, and, in particular, African-American actress Nichelle Nichols' portrayal of Lieutenant Uhura further stoked her interested in space.

Dr.Jemison graduated from Chicago's Morgan Park High School in 1973 and entered Stanford University at the age of 16.  Although she was young to be leaving home for college, Jemison later said it did not faze her because she was "naive and stubborn enough". There were very few other African-American students in Jemison's classes and she experienced discrimination from her teachers. She asserts that it was necessary for women and minorities to have some arrogance in order to be successful in a white male dominated society. During her senior year in college, she struggled with the choice between going to medical school or pursuing a career as a professional dancer after graduation. She decided on medical school and graduated from Stanford in 1977, receiving a B.S. degree in chemical engineering.

Jemison attended medical school at Cornell Medical School and during her training practiced in Cuba and Thailand, where she worked at a Cambodian refugee camp. She also worked for Flying Doctors stationed in East Africa. After graduating with a Doctorate in Medicine in 1981, she interned at Los Angeles County-USC Medical Center in 1982, and worked as a general practitioner. Jemison joined the staff of the Peace Corps in 1983 and served as a Peace Corps Medical Officer until 1985. She was responsible for the health of Peace Corps Volunteers serving in Liberia and Sierra Leone. Jemison supervised the Peace Corps' pharmacy, laboratory, medical staff as well as providing medical care, writing self-care manuals, and developing and implementing guidelines for health and safety issues. She also worked with the Center for Disease Control helping with research for various vaccines.

Upon returning to the United States after serving in the Peace Corps, Jemison settled in Los Angeles, California. In Los Angeles, she entered into private practice and took graduate level engineering courses. The flights of Sally Ride and Guion Bluford in 1983 inspired Jemison to apply to the astronaut program. Jemison first applied to NASA's astronaut training program in October 1985, but NASA postponed selection of new candidates after the Space Shuttle Challenger disaster in 1986. Jemison reapplied in 1987 and was chosen out of roughly 2,000 applicants to be one of the fifteen people in the NASA Astronaut Group 12, the first group selected following the destruction of Challenger. On September 28, 1989, She was selected to join the STS-47 crew as Mission Specialist 4 and was also designated Science Mission Specialist, a new astronaut role being tested by NASA to focus on scientific experiments. Jemison flew her only space mission from September 12 to 20, 1992, on STS-47, a cooperative mission between the United States and Japan, as well as the 50th shuttle mission. Jemison logged 190 hours, 30 minutes, 23 seconds in space and orbited the earth 127 times. Aboard the Spacelab Japan module, Jemison tested NASA's Fluid Therapy System, a set of procedures and equipment to produce water for injection, developed by Sterimatics Corporation. She then used IV bags and a mixing method, developed by Baxter Healthcare, to use the water from the previous step to produce saline solution in space. Jemison was also a co-investigator of two bone cell research experiments. Another experiment she participated in was to induce female frogs to ovulate, fertilize the eggs, and then see how tadpoles developed in zero gravity.

After her return to Earth, Jemison resigned from NASA in March of 1993 with the intention of starting her own company. Dr. Jemison served on the board of directors of the World Sickle Cell Foundation from 1990 to 1992. After leaving NASA in 1993, she founded The Jemison Group Inc., a consulting firm which considers the sociocultural impact of technological advancements and design. Jemison was a professor of Environmental Studies at Dartmouth College from 1995 to 2002 and became a Professor-at-Large at Cornell University in 1999. She continues to advocate strongly in favor of science education and getting minority students interested in science. She has been a member of various scientific organizations, such as the American Medical Association, the American Chemical Society, the Association for Space Explorers and the American Association for the Advancement of Science.