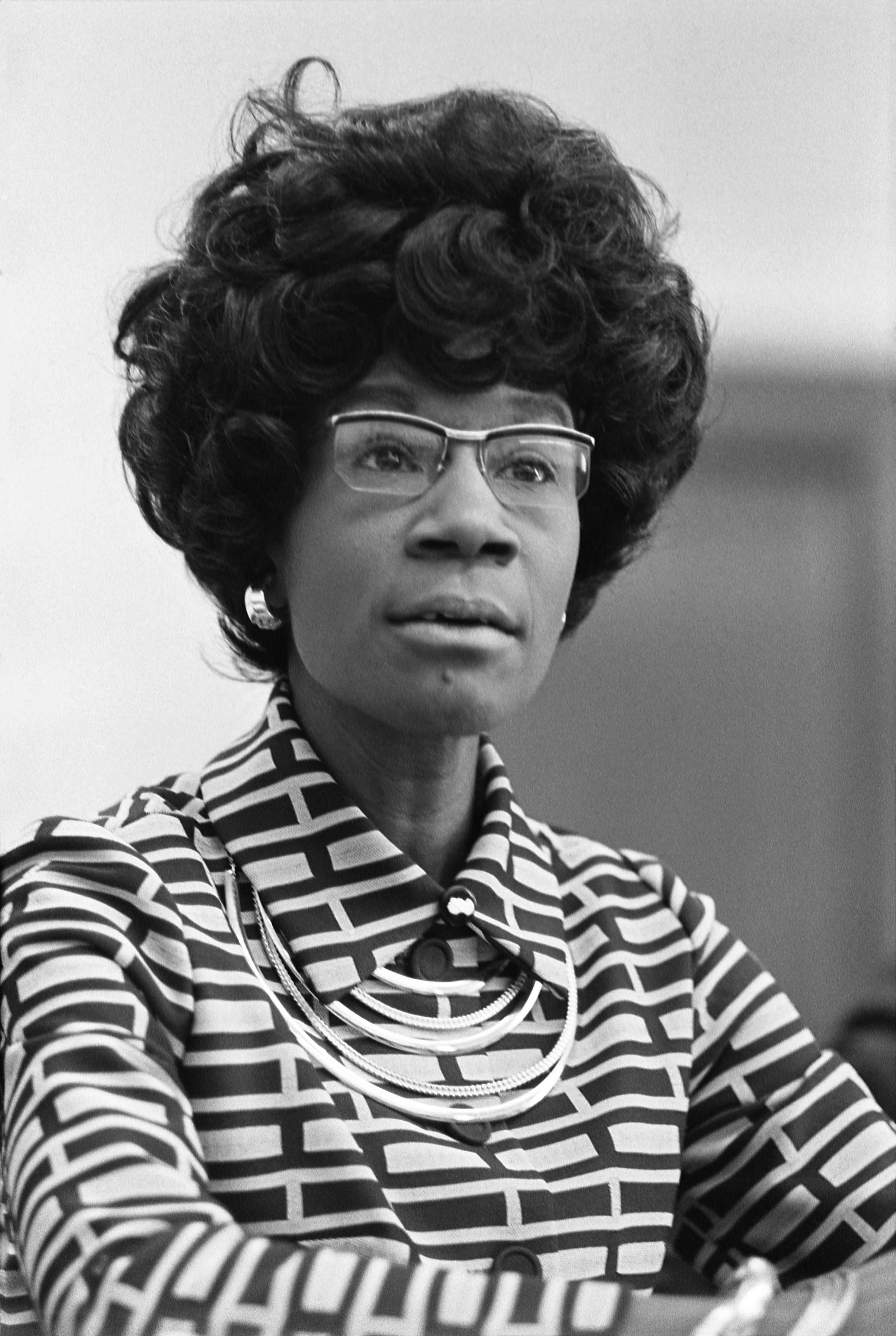 Shirley Chisholm was born Shirley St. Hill on November 30, 1924, in Brooklyn, New York, to Caribbean parents. Her parents both worked two jobs and found raising the children at the same time hard on the family, so in November 1929 when Shirley turned five, she and her two sisters were sent to Barbados to live with their maternal grandmother, Emaline Seale. There they lived on the grandmother's farm in the Vauxhall village in Christ Church, where she attended a one-room schoolhouse that took education seriously. Shirley credits this time with her grandmother as one of the reasons she valued education so highly. Shirley and her sisters returned to the United States in May 1934.

Beginning in 1939, Shirley attended Girls' High School in the Bedford–Stuyvesant neighborhood of Brooklyn, a highly regarded, integrated school that attracted girls from throughout Brooklyn. Shirley earned her Bachelor of Arts from Brooklyn College in 1946, where she won prizes for her debating skills. She met Conrad O. Chisholm in the late 1940s. He had migrated to the U.S. from Jamaica in 1946 and later became a private investigator who specialized in negligence-based lawsuits. They married in 1949 in a large West Indian-style wedding. Chisholm taught in a nursery school while furthering her education, earning her MA in elementary education from Teachers College at Columbia University in 1952. From 1953 to 1959, she was director of the Friends Day Nursery in Brownsville, Brooklyn, and of the Hamilton-Madison Child Care Center in lower Manhattan. From 1959 to 1964, she was an educational consultant for the Division of Day Care. She became known as an authority on issues involving early education and child welfare. Running a day care center got her interested in politics, and during this time she formed the basis of her political career, working as a volunteer for white-dominated political clubs in Brooklyn, and with the Bedford-Stuyvesant Political League and the League of Women Voters.

Chisholm was a Democratic member of the New York State Assembly from 1965 to 1968, sitting in the 175th, 176th and 177th New York State Legislatures. Her successes in the legislature included getting unemployment benefits extended to domestic workers. She also sponsored the introduction of a SEEK program (Search for Education, Elevation and Knowledge) to the state, which provided disadvantaged students the chance to enter college while receiving intensive remedial education. In August 1968, she was elected as the Democratic National Committeewoman from New York State.

In 1968 she ran for the U.S. House of Representatives from New York's 12th congressional district, Chisholm thereby became the first black woman elected to Congress. Chisholm was assigned to the House Agricultural Committee. Given her urban district, she felt the placement was irrelevant to her constituents, but after talking to a friend she decided to use the surplus food to help the poor and hungry. She worked to expand the food stamp program. She later played a critical role in the creation of the Special Supplemental Nutrition Program for Women, Infants and Children (WIC) program. She was then assigned to the much-prized Education and Labor Committee, which was her preferred committee. From 1977 to 1981, during the 95th Congress and 96th Congress, Chisholm was elected to a position in the House Democratic leadership, as Secretary of the House Democratic Caucus. Throughout her tenure in Congress, Chisholm worked to improve opportunities for inner-city residents. She was a vocal opponent of the draft and supported spending increases for education, health care and other social services, and reductions in military spending.

Chisholm began exploring her candidacy in July 1971, and formally announced her presidential bid on January 25, 1972, in a Baptist church in her district in Brooklyn. Chisholm became the first black major-party candidate to run for President of the United States, in the 1972 U.S. presidential election, making her also the first woman ever to run for the Democratic Party's presidential nomination. George McGovern ended up winning the Democratic Party’s nomination for that election and Richard Nixon was ultimately elected president.

After leaving Congress, Chisholm made her home in suburban Williamsville, New York. She resumed her career in education, being named to the Purington Chair at the all-women Mount Holyoke College in Massachusetts. As such she was not a member of any particular department, but would be able to teach classes in a variety of areas. She taught politics and sociology from 1983 to 1987. Chisholm retired to Florida in 1991. In 1993, President Bill Clinton nominated her to be United States Ambassador to Jamaica, but she could not serve due to poor health and the nomination was withdrawn.  In the same year she was inducted into the National Women's Hall of Fame. Chisholm died on January 1, 2005, in Ormond Beach near Daytona Beach, after suffering several strokes. She is buried in the Oakwood Mausoleum at Forest Lawn Cemetery in Buffalo, where the legend inscribed on her vault reads: "Unbought and Unbossed".