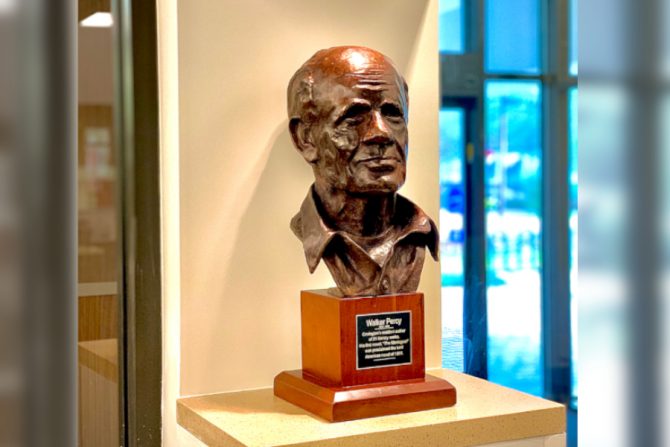 The City of Covington has long been known as a hub for artists of all kinds, writers, poets, patrons of the arts and of literature. The city has an illustrious history of talented artists and writers who have and continue to live and work here. In the ongoing list of notable figures, Walker Percy often comes to mind as one of its most famous residents. Now, the newly renovated Covington Branch of the St. Tammany Parish Library has its very own memorial of Walker Percy. It is a bronze bust sculpted by local artist Don C. Smith and donated by the Covington Public Art Fund. The bust continues to grace the space outside of the Genealogy room and in the main entrance observing the branch for literature lovers and library patrons alike. It was born out of friendship between an award-winning writer and an artist with a love of literature.

“When not painting or sculpting, I am generally relaxing with a good book. And fifty years ago it was this love of literature that destined me to meet Covington's man-of-letters, Walker Percy. We were brought together by a mutual friend in New Orleans. The purpose of our meeting was for Percy to interview me, not on my artistic accomplishments, but on my personal involvement in the 1960's Charismatic renewal taking place within the Catholic Church. Percy, being a devout convert to Catholicism, was instinctively curious about the new spiritual movement occurring in the church,” said Don C. Smith, Covington Sculptor and Artist.

The now 91-year-old artist is a master at many mediums including painting, portraiture, and sculpting and has been an artist for 70 of those years. Smith also holds a degree in history from Tulane University.

“After Percy's death in 1990, I relocated my own home and art studio from the urban sprawl of the south shore to the tranquility of Covington. It did not take me long however to become aware that my new hometown, where my friend Walker Percy had lived and written for over 40 years, had no public memorial honoring the memory of the world-famous author.”

The process of finding a home for the commemorative project hit a few snags along the way, but it came to fruition when Smith took the project to now Parish President Michael (Mike) Cooper who was Mayor of Covington at the time. Cooper formed and appointed a Public Arts Committee who then committed to the idea of putting Smith’s bronze bust of Walker Percy at a location in Covington.

“The committee subsequently commissioned me to create the bronze portrait of the author that is now displayed in the Covington Library where lovers of literature can be inspired to read the works of this gifted local writer,” said Smith.