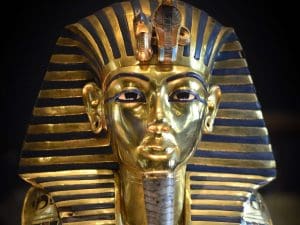 November marks the 100th anniversary of the discovery of the tomb of Tutankhamen.

Possibly the most famous king of ancient Egypt, Tutankhamun (commonly known as King Tut to modern people). He was one of the last pharaohs of the 18th dynasty, possibly the son of Akhenaten. Tutankhamen was nine years old when he ascended to the throne, ruling for about ten years, before dying at the relatively young age of eighteen or nineteen. Though he had children, neither survived him, and the Egyptian throne eventually passed to one of his distantly related uncles, known as Ay.

Though short, the reign of Tutankhamen was notable for overseeing a shift in Egyptian culture, or rather, a shift back. During the reign of Akhenaten, a god king cult developed around the pharaoh and his wife Nefertiti, wherein the traditional religion of the Egyptian gods was overshadowed by direct worship of the pharaoh as a singular godlike entity. Also during this time, Akhenaten moved the entire royal court to the city of Amarna as the new capitol of the kingdom. After Akhenaten's death, however, the new religion quickly died out. Early in Tut's rule, the capitol was officially moved back to Thebes, and the traditional religion reinstated.

The discovery of King Tut's tomb in 1922 was a noted discovery during the golden age of Egyptology. By the early 20th century, the ancient Egyptian dynasties had long since ended and most of the tombs were known. Over the centuries, a great many of the tombs had fallen prey to thieves and treasure hunters, even before archaeologists from Britain, France, and the rest of Europe descended on the region. Thus, the discovery of a new tomb in 1922 came as a surprise to the dig site supervisor, Howard Carter. Though much of the Valley of Kings (the traditional burial site of Egyptian rulers) had been excavated for over twenty years by this point, Tutankhamen's tomb had been buried under rubble, perhaps as early as two centuries after his death, circa 1130 BC. Buildings had been built over the rubble, further hiding the tomb, where it remained hidden for centuries. Excavation of the huts built over the tomb had been delayed owing to the proximity of other tombs that drew regular tourist crowds. The accidental discovery of Tutankhamun's tomb therefore came as a surprise.

In part due to being buried, Tutankhamen's tomb was one of very few such tombs that had never been ransacked or combed over. As such, when Howard Carter and his team dug into the tomb, they discovered more than 5,000 items to catalog, many of them quite valuable. Some of them include:

Perhaps even more famous than King Tut or his tomb is the legendary curse supposedly attached to it. Inspiring such films as, The Mummy and The Mummy's Curse, long standing rumors have afflicted the discovery of the tomb with the reported deaths of several of the excavators. By several, we mean more like eight out of fifty-eight, over a dozen years. Lord Carnvanon perished five months after opening the tomb due to complications of pneumonia and a weak immune system, and Howard Carter died in 1939, aged 64, of lymphoma. Other openers of the tomb, including Carnavon's daughter, lived for several more years, the latest dying in 1980. The rumored curse may very well have been a fabrication of newspapers attempting to sell on sensational stories.

Today, King Tut's tomb is a popular tourist site, where the king has been laid in a specialty preservation case, largely since 2009. Many of the artifacts discovered in his tomb have been hosted in museums across the world, some permanently, others as part of rotating museum tours.

If you'd like to learn more about Tutankhamen, feel free to check out one of the items below. Happy reading!

The Murder of Tutankhamen

The Tomb of Tutankhamen

The Discovery of Tutankhamen's Tomb

The Face of Tutankhamun

Howard and the Mummy