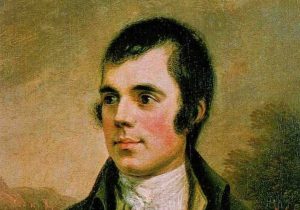 Robert Burns was born in 1759 near Ayr, Alloway. Young Robert received a sporadic education, as was common in those times, although his father William Burnes was a self-educated man. From an early age William taught Robert how to read and write, mathematics, history and geography. As he grew older, Robert did receive formal lessons in Latin and French from one John Murdoch, a travelling educator.

"Auld Lang Syne" originated as a Scottish folk song sung to commemorate the ending of important events and occasions. The exact origins of the song are unknown, although the first verse at least was collected down in 1711 by one James Watson. Burns took down the poem in 1788 in an attempt to put to writing a song that had only ever been orally recounted. Most of the poem is original to Burns, and the poem quickly grew to a national favorite. Burns spent much of his adult life in carousing and merriment, and his song quickly developed a reputation as a favorite for ending such events, New Year's Eve included. Today, "Auld Lang Syne" is popular throughout the world.

Another of Burns' renown poems is "Address to a Haggis". The first verse of this composition to the named food item follows below:

Aboon them a'ye tak your place,

As laing's my airm.

The full poem can be read here, opens a new window.

Haggis is the national dish of Scotland, and has been associated with the nation officially since the 18th century. Haggis falls into the category of 'pudding', which is the British Isles, are variations of sausage. It is traditionally made using sheep offal and various spices and seasonings, not unlike boudin and other rustic sausages. 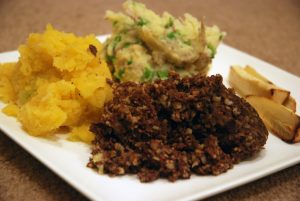 The Burns Supper is a traditional meal held on Robert Burns' birthday. Traditionally, haggis is served with 'neeps and tatties' (turnips and potato) along with a dram of whiskey. Burns Night emerged as a very popular day of national import after 1802, when the first such dinner was held in Greenock. Burns Day is so popular in fact, it is celebrated more widely than the official national observance of St. Andrew's Day.

Robert Burns, born a farmer's son, never had robust health or a prosperous future. Though gifted as a poet and song-writer, he spent much of his life struggling to support his wife and twelve children. At the age of 37, he died at the height of his fame in 1796. Numerous monuments have been erected in his honor, and he is listed as an early influence among romanticist poets. Below is a photo of the Burns Monument Centre in Kilmarnock. 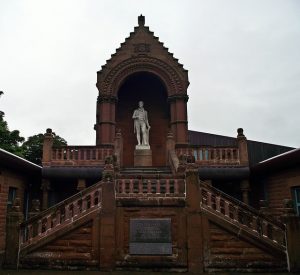 The Complete Works of Robert Burns: Containing His Poems, Songs, and Correspondence

Looking for something else? The St. Tammany Parish Library is always happy to offer use of our online catalog, opens a new window for more information on this and other topics. Until next time!