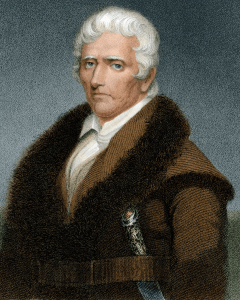 June 7 celebrates the day Daniel Boone began exploration of the State of Kentucky.

Daniel Boone is commonly thought of as a near mythological pioneer man, but he was very much a real person. The Boones first settled in Pennsylvania in the early 18th century; Daniel himself was not born until 1734. From a young age, Daniel developed a fierce love of the outdoors, and was a notable hunter and marksman by the age of 12. Over the years, Daniel continued to make a name for himself, exploring the hinterlands around Pennsylvania, Virginia, and North Carolina. Boone did not finish a formal education, but could read, and his favorite book was Gulliver's Travels.

Boone also developed a lifelong relationship with various Native Americans, particularly the Cherokee. Boone first learned to hunt and track from them, and even in his later life retained respect for them. While he did hunt, Boone was not fond of war, though he did take up his arms in several conflicts, including Dunmore's War and the American Revolution. During the American Revolution, he was instrumental in protecting American settlers during the Siege of Boonsburough, a battle which inspired a similar event in the novel Last of the Mohicans. Though the legality of said colony was contentious, Boone's heroics did save the day and helped pave the way for future settling in what was then the Western frontier.

In the intervening years following the American Revolution, Boone ultimately left Kentucky and moved even farther west, finally settling in Missouri. Daniel Boone spent the remainder of his life there. At the time, Missouri was still part of Spanish Louisiana, until it transferred to France and sold to the United States in 1803. Boone died in 1820 and was buried on family land, until his body was exhumed and moved to Kentucky in 1845, which remains a matter of issue between the two states, including whether the moved remains even belong to Boone.

Feel free to enjoy some of our collection relating to the life of Daniel Boone:

Who Was Daniel Boone?