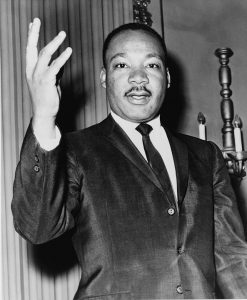 This year, on January 15, we celebrate the life of Martin Luther King Jr. He was a well-known Civil Rights leader and activist who had a great deal of influence on American society in the 1950's and 1960's. His deep belief in nonviolent protest inspired his fellow Civil Rights activists.

In 1964, King won the Nobel Peace Prize. That same year, Congress passed the Civil Rights Act. This law made it illegal to discriminate against a person because of the color of their skin in specific situations, such as housing and eating in restaurants.

Even after the Civil Rights Act of 1964 passed, it was clear to Martin Luther King Jr. and his colleagues that the civil rights of black people were being ignored in many parts of America. King believed that this situation would not change until more black Americans voted in elections. At that time, few blacks were able to vote, as many states had established rules making it difficult, if not impossible for them to register to vote. King went to Washington, D.C. to discuss a voting rights bill with President Lyndon Johnson. Although the president was supportive, he did not think the time was right for the bill to pass. He told King to wait, but King knew his people could not wait for others to bring about social change. They were determined to do it themselves.

King and his fellow nonviolent activists went to Selma, Alabama in December of 1964 and spent their time organizing boycotts and protests against discriminatory bus services.  After experiencing much violence and hardship during the next 13 months, the boycotts and marches were ultimately effective. The U.S. Supreme Court ruled that segregation on public buses is unconstitutional. President Lyndon Johnson realized the time was right to discuss the voting rights with Congress and America. On August 6, 1965, the president signed the Voting Rights Act of 1965, which prohibits racial discrimination in voting.

On April 4, 1968, while encouraging nonviolent protest in the Memphis Sanitation Worker's strike, King was assassinated. He was only 39 years old.

Martin Luther King Jr.’s brief life was filled with numerous remarkable accomplishments, based on his genuine belief in the ability of humans to live in peace.

Click here to see a list of resources to learn more about Martin Luther King Jr. and his work for equal rights.