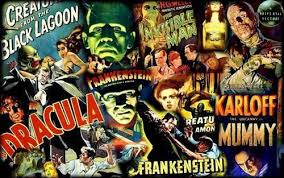 Macabre movies for your spooky Halloween night in? Freshly popped popcorn, drinks or some pumpkin spice tea and hoarding your Halloween candy all for you to munch on...unless of course, you would like to share with the trick-or-treaters flocking to your door. You could also invite a few friends over to share in the scare. Here are some recommendations for a quiet, albeit creepy Halloween night courtesy of the St. Tammany Parish Library.

Whatever is your poison of choice, whether it is classic horror, modern horror or things that are more funny than scary, the St. Tammany Parish Library has your back for your own Halloween classic movie festival.

The Twilight Zone is technically Sci-Fi, but the show can still give you a creepy and otherworldly feel. The original series broadcast on CBS from 1959-1964 and celebrates 60 years this year. Over the years, it has been revived many times and adapted to other mediums including radio broadcasts and movies.

Alfred Hitchcock is the original master of horror whether he was presenting short serials based on short stories by well-known horror fiction writers or directing classic movies that still hold up today including Vertigo and Psycho.

The 1932 Award Winning Dr. Jekyll and Mr. Hyde is the best version I have found of this classic horror novel. Chilling, thrilling, and not for the faint of heart.

A vampire movie before any Dracula incarnation. A silent-era film that relies on creepy atmosphere, Nosferatu delivers.

Want a B-movie 1950's horror/sci-fi that takes you through a sleepy town being invaded by the original slime? Beware of the Blob!

House of Wax features another horror legend at his finest: The late, great Vincent Price as he navigates the world of an insane, deformed sculptor in a world of his own creation.

The Binge Boxes have arrived at the library and are a set of movies in one convenient DVD case. They have an array of films in one genre including Original Nightmares which includes Dracula, the Motion picture from 1931, the original Frankenstein Motion picture and Bride of Frankenstein, Creature from the Black Lagoon, the 1932 Mummy and the 1933 Invisible man.