October 1, 1971 marked a very special day in the annals of entertainment history: the grand opening of Walt Disney World! 2021 marks fifty years of operation at The Most Magical Place on Earth. Above is a photo taken on opening day with the entire cast, including costumed mascots. How many can you identify?

Walt Disney had a thriving empire by 1955, after the opening of his first theme park, Disneyland, in California. While constructing the original theme park, Walt Disney had plans for an even bigger, more magnificent experience. To accomplish this, he'd need land, lots of it, and relatively inexpensive. This was unsurprisingly hard to come by in urban California, so Walt Disney searched elsewhere.

Walt Disney's research team came to a logical conclusion: most of the visitors to Disneyland lived on the West Coast, most from California itself. While Disney fans existed across the country (and arguably the world, even then), many found it burdensome to travel across the country just to visit. His new theme park would have to be closer, east of the Mississippi River, where land was cheap and plentiful. Among the many locations Disney inspected, most of them were in the South, including a site near New Orleans. In the end, Walt Disney settled for a large tract of swampy land in Orange County, Florida, just east of the then-small town of Orlando.

In the late 1950s, Florida enjoyed a healthy amount of land speculation. A local air force base called the city home, and served as the nearby liaison to the new and upcoming Kennedy facility on the Cape Canaveral. Orlando also enjoyed ready access to the ever-expanding highway system known as the Interstate, with plans for I-4 between Tampa and Daytona Beach, with Orlando right in the middle.

By 1963, Walt toured the various sites by plane, before deciding on Orlando. Disney began procuring copious amounts of land in the area, largely through 'dummy corporations'. A 'dummy corporation' is a false corporation set-up and operated by a second company, which provides protection in various areas. Though usually a popular tactic with illicit groups, Disney legally made use of these dummy corporations to buy the land in Florida without unduly driving up speculation on what the land was really for. Eventually however, word got around that Disney was planning a new theme park, and some clever reporters figured out the truth. In an effort to beat the press, Walt and his brother Roy set up a conference alongside Governor W. Haydon Burns, and on November 15, 1965, officially announced the creation of Walt Disney World. 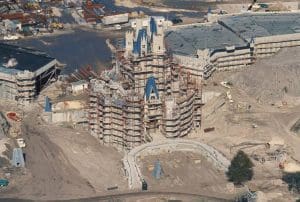 The strategic plans for Walt Disney World go beyond mere land speculation. When he built Disneyland in 1955, Walt Disney contended with a large population and limited space. While he could built his theme park, there were limitations on how big it could be, and who his neighbors were. For his "Florida Project", Disney required more control, and got it. The Walt Disney Company procured so much land, that they were practically a city unto themselves. Disney registered with the State of Florida and received special permission to form a new governing entity and two new cities: Bay Lake and Lake Buena Vista, both operated by the Reedy Creek Drainage District (later reincorporated as the Reedy Creek Improvement District). This created an incorporated government entity thru which Disney would build and run the parks. The RCID maintains virtually all government services in the area, including building codes, utilities, roads, and common traffic issues.

Unfortunately, Walt never got to see his project brought to life, as he died of lung cancer in 1966. Roy Disney, ailing and planning to retire himself, took charge of the project, which finally finished on October 1, 1971. On that day, Magic Kingdom opened, alongside two resort hotels.

Magic Kingdom existed in many ways as a localized, somewhat larger version of Disneyland in California. The park includes six areas: Main Street USA, Adventureland, Frontierland, Liberty Square, Fantasyland and Tommorowland. The areas are variably themed and provide specific scenery and attractions apt to various Disney projects. These attractions have changed over the years, and some have even come and gone. Original attractions that were eventually removed:

Below is an original map of the theme park, circa 1971. 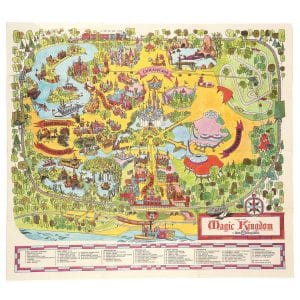 Since 1971, Walt Disney World has experienced tremendous expansion, including several new theme parks, and many new and updated attractions over the years. For many, Magic Kingdom remains the Most Magical Place on Earth and many people's favorite theme park.

Also feel free to check out our collection of online blogs, opens a new window! We're always writing about interesting topics so feel free to drop by and see what's on our mind.