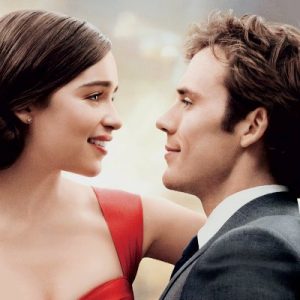 Two highlights in a month! This week, it's Me Before You, by Jojo Moyes. Have you heard of this book?

Me Before You is the first in a series of novels by Jojo Moyes, about a young English woman named Louisa Clark and the man who changed her life, Will Traynor. Louisa is a 20-something still living at home with her parents and younger sister, struggling to hold down a job. Lou is a hard worker, but sometimes she has the worst luck, she is prone to clumsiness, and she often puts the comfort of others -namely her dysfunctional family- ahead of herself.

Lou gets a lucky break when she is hired by the wealthy Traynor family to look after their son, Will. Once a playboy in the vein of Prince Harry, Will suffered a tragic accident that left him paralyzed from the neck down. Rather than play nurse to Will's condition, Lou is to be his companion, in an effort to improve his mood and help provide a reason to keep going on, and provide additional help should he need it.

Moyes originally released the book in 2012, to impressive reviews. While books in the genre, including her own, are known for being sappy in places, Me Before You dares to tread into deeper water by tackling the question of 'right to life'. Can a person choose to end his own life? Is a life with dignity more important than just being alive? The book asks these and many other difficult questions, and while I will not spoil it, I will say that all of these questions are handled with maturity and respect.

A few years later in 2016, Warner Bros. and New Line Cinema released a film adaptation. Starring Emilia Clarke (Game of Thrones) and Sam Claflin (Catching Fire, Pirates of the Caribbean: On Stranger Tides), the movie hits more or less all of the same points as the book. The biggest difference is Thomas, Louisa's young nephew, who is absent in the film. Of note, Will's father is played by Charles Dance, another Game of Thrones alumni who plays Tywin Lannister in the show.

Me Before You is also available in other formats., opens a new window

Between both the book and the movies, there is a very clear message: just live. Be adventurous, whether you're in a wheelchair or fully mobile. Make the most of the life you are given, because life is not something to be squandered but enjoyed. Regardless of circumstance, life is always better when you are having fun and spending time with people you care about.

Looking for something else? The St. Tammany Parish Library is always happy to offer use of our our catalog, opens a new window for all of your browsing inquiries.