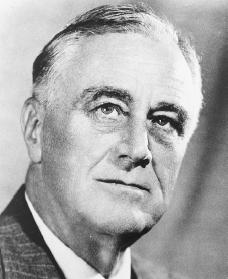 This January 30 celebrates the anniversary of the birth of Franklin Delano Roosevelt in 1882. He would be 137 today.

Franklin was born a Roosevelt, a respected family of Dutch ancestry.  In the late 19th and early 20th centuries, the Roosevelts earned distinction for their latest scion, Theodore Roosevelt, who became the 26th President of the United States; Theodore was a distant cousin and role-model to young Franklin. Hailing from respected business families on both his mother and father's sides, Franklin grew up in relative comfort. Well-learned and traveled, Franklin could speak both French and German, that latter of which proved quite useful when he briefly attended public school in Germany.

After graduating from Groton School in Massachusetts, Franklin attended Harvard College, where he obtained a bachelor's degree in history and ran Harvard's newspaper, The Harvard Crimson. Roosevelt also studied at Columbia Law School, but left in 1907 after successfully passing the New York State Bar Exam and obtaining a position at a law firm.

In 1905, Franklin married his fifth cousin, Eleanor Roosevelt. The two had an amicable marriage, with six children, and lived not far from his childhood home in Hyde Park, New York. 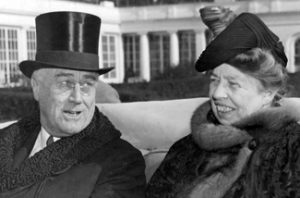 By 1910, Franklin turned his attention fully to politics. After a brief run for New York State Assembly, Franklin opted to acquire a seat in the state senate. Despite vast Republic support in the area, largely attributed to Cousin Theodore, Franklin campaigned and won in a surprise election. The familiar ties between Theodore and Franklin exceeded any party loyalty to Republicans or Democrats. Franklin grew up very proud of his cousin's accomplishments, and Theodore's political career had a tremendous impact on Franklin's ambitions.

In 1913, Franklin received a position as the Assistant Secretary of the Navy, a role he held for the duration of World War I, until in 1920 when he joined James Cox in a bid for the White House. Despite effective campaigning, Cox and Roosevelt were soundly defeated, although Roosevelt claimed that he made numerous important allies in 1920.

Not long after the campaign however, tragedy struck. In 1921, Roosevelt became dangerously ill, suffering from numerous physical issues that finally solidified into paralysis. Doctors at the time diagnosed Roosevelt with poliomyelitis, although modern studies contest that Roosevelt may have suffered from Guillan-Barré syndrome. Paralyzed from the waist down, Roosevelt would never walk unassisted again... but that did not stop him! 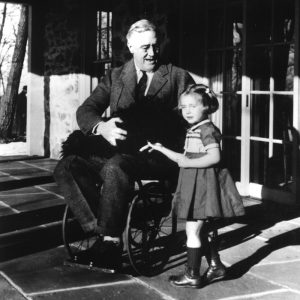 In 1928, Democratic party leaders called on Roosevelt to run for the office of Governor in New York. He served two full terms, during which the stock market crashed. Roosevelt carried through many important reforms, including a relief system for unemployed workers, investment in public works, and investigations into public corruption.

By 1932, the Great Depression showed no sign of ending any time soon. Hoping to bring his policies nationwide, Roosevelt began campaigning, and clinched the Democratic nomination after four rounds of voting. In the actual election, Roosevelt won with 57% of the vote and an overwhelming majority of electoral votes. Roosevelt promised much to the beleaguered nation, including lower tariffs, aid to farmers, and more public projects.

At the acceptance speech for his nomination, Roosevelt promised 'a new deal for the American people'; his New Deal coalition formed the backbone of much of Roosevelt's politics while president. Roosevelt's presidency and the New Deal resided on the three R's: relief, recovery, and reform. Much of the damage done by the Great Depression originated in the financial sector, and Roosevelt pushed through many new regulations to reign in the unwieldy system. In 1936, Roosevelt won re-election in a landslide victory that had him win over 98% of the electoral votes (all but Maine and Vermont) and over 60% of the popular vote. Roosevelt's electoral victory is a record he continues to hold.

In 1940, Roosevelt became the first president to win a third election. Though the economy had recovered by then, the United States had yet to return to pre-Depression levels of security. Worse, the political stability of many other nations began to flounder as the world neared the outbreak of another global war. Faced with a belligerent Germany run by Adolf Hitler's Nazi Party, Italy under Mussolini, and the Japanese Empire, Roosevelt won his election in a time of pending crisis. In his, and many others', view, it was not a matter of if war would break out, but when.

War finally came in 1941, from a somewhat unexpected venue. On December 7, the Japanese Empire launched a surprise attack on Pearl Harbor, destroying numerous ships and airplanes and killing over 2,000 people. The next day, President Roosevelt delivered one of his greatest speeches, the "Infamy Speech", after which Congress unanimously declared war on Japan within the hour. By the next day, the United States was also at war with Germany and Italy. 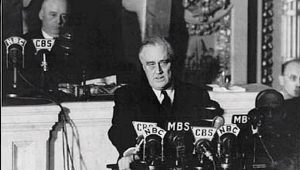 If you want to read the Infamy Speech, click here.

Roosevelt remained in office for the rest of his third term, during which the United States and its allies made gradual progress in its war against the Axis Powers. Roosevelt sought reelection for a fourth term in 1944, which he won alongside running-mate Harry S. Truman. To this day, Roosevelt remains the only president to have been elected for third and fourth terms. Roosevelt remained in office for just over ten weeks, before he died as a result of his deteriorating health. He was 63 at the time of death, whereupon Truman succeeded him as president.

Want to learn more about President Franklin Delano Roosevelt? Feel free to peruse a few of our selected items:

The Plot to Seize the White House

The Mantle of Command

Looking for more options? Feel free to check out our catalog.