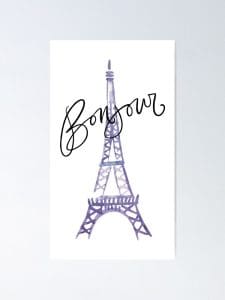 March 20th is UN French Language Day, the international recognition and celebration of the French language.

The French language is one of the most spoken languages in the world, spoken by nearly 80 million people in France, and nearly 300 million worldwide. French is an official language in 29 countries and remains popular in much of the world.

French is considered a Romance language, along with Spanish and Italian. The three are descended from Vulgar (i.e. common) Latin, as it was spoken in the Roman Empire of old. After the fall of the Roman Empire and the isolation of the various constituent communities, the language divided and transformed through local practices. The earliest differences began appearing in France as a result of intermingling with the Gallic French, from when France was called Gaul prior to the 1st century A.D., and resulted from the lingering presence of the local Celtic culture. Nearly 200 words can be traced to this mixture of Latin and Celtic Gaulish.

For the next several centuries, the Roman Empire endured successive waves of invaders, largely Germanic tribes. By 476, Rome itself fell, and the Romanized provinces of Gaul saw further cultural developments, as Germanic influences began altering the language. Linguists treat this as the time of Old French, with the rise of the Frankish kingdom, and continued into the reign of Charlemagne, the Conquest of England, and the early Middle Ages.

By the fifteen century, Modern French arose and developed as a dialect of Middle French. It was also at this time that Middle English began to gain traction, as by the 15th century, England was being ruled by properly English kings who spoke the native dialect as opposed to French, even though England and France continued to periodically wage war on one another over French territory.

By the seventeenth century, French replaced Latin as the language of science and diplomacy, due to the continuing decrease of practicing Latin speakers and the rise of modern nations and the preference of local languages. Also by this time, much of the known world had been mapped out and various kingdoms began founding territorial claims and colonies in far off territories (often ignoring the native inhabitants). France was one such burgeoning empire, and the French language spread along with it, finding new homes in places such as the Caribbean, Canada, Louisiana and much of the southern United States, Northern and Central Africa, Vietnam, and many other places. Modern or Parisian French lives alongside the various French Creole languages around the world.

French continues to be a leading language of commerce, science, and diplomacy for much of the world.

Want to learn more about the French language? Feel free to check out some of our sources below:

Also be sure to check out Gale Online and Pronunciator, our free language services. All card-carrying members of t he St. Tammany Parish Library have free, unlimited access to these great resources, opens a new window where you can learn about all kinds of languages, including French! Parlez-vous Francais?