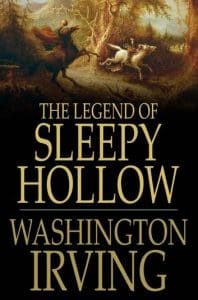 Washington Irving's The Legend of Sleepy Hollow is an American classic, and one of the earliest and most renown stories taking place in our country.

Written in 1820, The Legend of Sleepy Hollow is a fictionalized historiography of the quaint town of Sleepy Hollow, a Dutch settlement in New York state. The early history of the town is told, explaining the  history of the town since its founding by Dutch settlers in the 17th century, and the various quaint attributes of the town and its inhabitants, relative to the more modern mannerisms as found in New York City and other much larger locations. The story settles on Ichabod Crane, the new schoolmaster of Sleepy Hollow, who eventually falls victim to the mysterious Headless Horseman.

The Headless Horseman is a phantom whose origins predate even Colonial America. Headless dead people a-horse can be found in Irish and Scottish legend, such as the dullahan in Ireland and the decapitated Ewen of Scotland. Early English colonists and their American grandkids grew up on such tales, and Irving himself surely heard the like both in America and during his stay in England in the 1810s.

Alongside his other great story, Rip Van Winkle, Washington Irving successfully brought to life a new chapter in American folklore. While the connections of these stories to the actual history of the areas remains a curious contention, these two stories now loom large in American literature, particularly the Legend of Sleepy Hollow.

There have been several adaptations of Sleepy Hollow to film, but two loom particularly large.

The Adventures of Ichabod and Mr. Toad 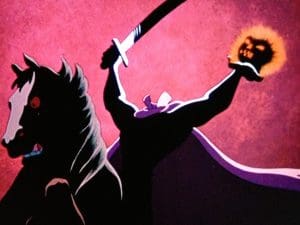 One of the earliest adaptations was by none other than Disney. In the late 1940s, the Disney company attempted to save production and advertising costs by creating short films based on widely known characters and stories. To be sure, most Disney works are adaptations of stories already well known in literature and legend (Snow White, Pinocchio, etc.) but now Disney had turned its talents to adapting American and English classics. While the first half of the compilation film is a loose accounting of Kenneth Grahame's The Wind in the Willows, the second half tells The Legend of Sleepy Hollow. The story is essentially the same as in the classic tale, substituting the various historical and mythological allusions with creepy frights, and a genuinely terrifying Headless Horseman. 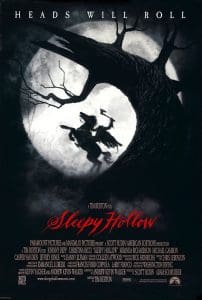 1999's Sleepy Hollow is the most recent theatrical production. Produced by Paramount and Directed by Tim Burton, Johnny Depp stars as Ichabod Crane, recharacterized as a constable from New York City, called in to help solve the murders taking place in Sleepy Hollow. The film is largely portrayed as a gory horror film, showing various character deaths, all at the hands of the Headless Horseman, portrayed by both Christopher Walken and Ray Park. Crane discovers the murderous specter to be under the control of a local witch, and together with the locals must put an end to the grisly murders. Against a budget of $70 million, the film cleared over $200 at the box office.

However you choose to enjoy one of America's most renown ghost stories, we all hope everyone has a safe and fun Halloween.