It's that time of year again: Halloween! On this special blog, I will be spotlighting one of my favorite suspense novels/movies: The Silence of the Lambs. 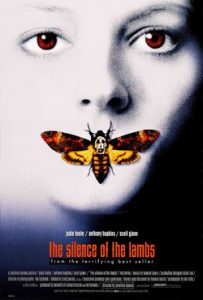 The Silence of the Lambs was originally written in 1988 by Thomas Harris as a sequel to his first novel in the series, Red Dragon. FBI agent Clarice Starling is tasked with ending the murder spree of 'Buffalo Bill', a notorious serial killer. With few leads, she interviews the deranged psychologist Dr. Hannibal Lecter, an imprisoned serial killer himself, for insight into 'Buffalo Bill's' motives.

The Silence of the Lambs

Red Dragon, written in 1981, had been made into a movie titled Manhunter by 1986, to lackluster results; it starred Brian Cox as 'Dr. Hannibal Lecktor'. The Silence of the Lambs however proved to be successful both in print and as a film. Anthony Hopkins was recast as Lecter, and joined by actress Jodie Foster as Clarice Starling.

The movie remains one of the highest critical successes of their careers, and became the third film ever to win the top five categories at the Academy Awards: Best Picture, Best Director, Best Adapted Screenplay, Best Actor (Hopkins) and Best Actress (Foster). It was included in the Library of Congress' National Film Registry for posterity in 2011.

The Silence of the Lambs

The film was so successful, it remains the only horror/suspense film to win the Academy Award for Best Picture. It also rejuvenated interest in Thomas Harris' series, which brought film adaptations of his other works, several featuring Hopkins in the lead role: Hannibal (2001), Red Dragon (2002), and Hannibal Rising (2007).

The Silence of the Lambs, as both a novel and film, remains among the most critically acclaimed works of mystery and suspense.

Have a favorite suspense film or novel of your own? Feel free to leave a comment!